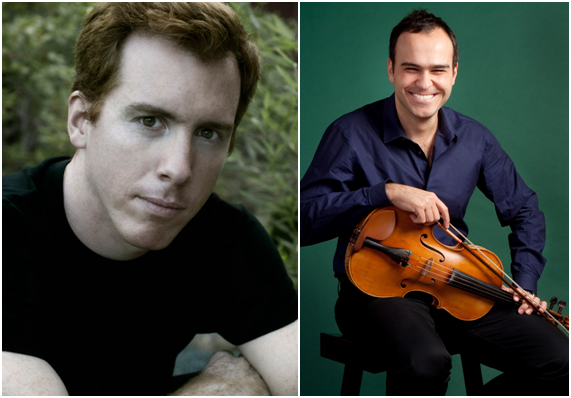 FLUX Quartet violist Max Mandel and New York Philharmonic pianist Eric Huebner join forces to give a recital of premieres by New York’s avant-garde composers Annie Gosfield, Yotam Haber, Elizabeth Hoffman and Michael Vincent Waller. Combined with masterpieces by Gavin Bryars and Morton Feldman, the duo devotes this evening at Roulette to their obsession with new works that expand the emotional and intellectual range of chamber music for viola and piano.

Pianist Eric Huebner has drawn worldwide acclaim for his performances of new and traditional music since making his debut with the Los Angeles Philharmonic at age 17. In January 2012, he was appointed pianist of the New York Philharmonic and has been featured as soloist with Musicians from the Philharmonic in works by Elliott Carter, Jay Alan Yim and recently in the season opening gala alongside cellist Yo-Yo Ma in music by Astor Piazzola.  Mr. Huebner is an Assistant Professor of Music at the University at Buffalo where he maintains an active piano studio and performs with the Slee Sinfonietta – a faculty chamber ensemble devoted to contemporary music.  He has recorded for Col Legno, Centaur, Bridge, Albany, Tzadik, Innova, New Focus Recordings and Mode Records and holds a B.M. And M.M. From The Juilliard School where he was a student of Jerome Lowenthal.

Canadian violist Max Mandel is one of the most acclaimed and active chamber musicians of his generation. Comfortable in many styles and genres, his current group affiliations include the FLUX Quartet, The Knights, The Silk Road Ensemble, The Smithsonian Chamber Players, The Caramoor Virtuosi and ClassNotes. He has been Guest Principal of The Chamber Orchestra of Europe, Camerata Nordica, Camerata Bern and The Canadian Opera Company Orchestra. He is also a frequent guest member of Tafelmusik Baroque Orchestra. He has collaborated with many of today’s greatest composers including Alvin Lucier, David Lang, Don Byron, Wolfgang Rihm, Robert Ashley, Michael Byron, Oliver Lake and Somei Satoh.  He plays on a 1973 G.B. Morassi generously loaned to him by Lesley Robertson of the St. Lawrence Quartet. He resides in Brooklyn, NY.