Jason Kao Hwang: STORIES BEFORE WITHIN 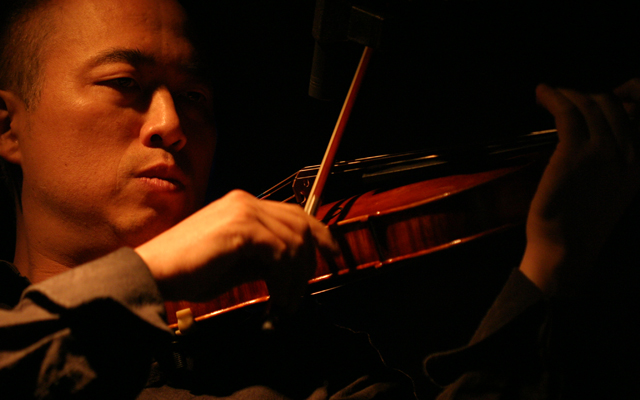 Jason Kao Hwang: STORIES BEFORE WITHIN

CELEBRATING THE RELEASE OF
STORIES BEFORE WITHIN (Innova Records)

Jason Kao Hwang’s quartet EDGE is nested in the urban mountains of New York City where he created Stories Before Within, personal tales celebrating both life and loss. Over the past three years EDGE has embraced both past and future with musical offerings resonant with human and animal overtones. Their instruments sing through sharp lines vibrating between history, cultures and genres.

In 2006, EDGE’s first CD (Asian Improv Records) scaled the college radio charts at #14 for CMJ and #4 for Canada’s EARSHOT. EDGE was ranked #3 on a Top Ten CDs of 2006 list for ALL ABOUT JAZZ. They have performed Vision Festival XI, Tonic, Brooklyn College, the Living Theater, and the Stone, all in NYC. EDGE also performed at Sangha (Washington, D.C.), An die Musik (Baltimore), the Deep Listening Institute (Kingston, NY), and the Sanctuary for Independent Media (Troy, NY). In the fall of 2008, EDGE will tour Syracuse, Rochester and Buffalo. They will also perform in EDGEFEST (name has no prior relation) at the Kerrytown Concert House in Ann Arbour, Michigan.

The four manage to meld their individual experiences into a group that can swing hard, evoke the pentatonics and timbres of Asian music traditions or blues edge and push toward freedom.
Michael Rosenstein, SIGNAL TO NOISE, 2006

Jason Kao Hwang (composer, violinist) has created works ranging from jazz, classical, “new” and world music. As violinist, he has worked with Reggie Workman, William Parker, Pheeroan akLaff, Anthony Braxton, Vladamir Tarasov, Butch Morris and Henry Threadgill. As composer he has received support from the National Endowment for the Arts and New Jersey State Council on the Arts and others. His duo with Sang Won Park(kayagum, ajeng, voice), Local Lingo (Euonymus Records), recently broke into the CMJ charts at #36. His chamber opera, The Floating Box, A Story in Chinatown (New World Records), was named one of the top ten opera recordings of 2005 by Opera News. Music From China recently commissioned his string quartet, In the Garden of Morning Glories (violin, erhu, pipa, yanqin), which premiered at Symphony Space.

Taylor Ho Bynum (coronet, various brass) is a composer and bandleader born in 1975, raised in Boston, and presently residing in Brooklyn. Bynum has established a reputation as a unique musical voice willing to take chances in a wide variety of artistic contexts. Projects range from ensembles in the jazz tradition, to work with DJs, contemporary classical composers, and world music ensembles, to composing for film and theater, to collaborations with dancers and visual artists. He leads a variety of small groups and the large ensemble SpiderMonkey Strings, and works with Anthony Braxton, Cecil Taylor, and the Fully Celebrated Orchestra.

Andrew Drury (drum set) is a drummer/composer whose work has been noted for its lyricism and expansive approach to form and technique. Drury can be heard on fifteen CDs (two as a bandleader) and he has performed in Europe and the Americas with Michel Doneda, Mark Dresser, Briggan Krauss, Myra Melford, Chris Speed, Jack Wright, Kenny Wolleson’s Marching Band with Butch Morris, and others. A former student of Ed Blackwell, he photographs drum solos in desert and prairie settings, collaborates frequently with dancers, and has led over 700 junk percussion workshops across the U.S.

Ken Filiano (string bass), has fused the rich traditions of the double bass, bringing out the many voices inherent to the instrument. His solo bass CD, Subvenire (NineWinds), received unanimous critical praise, and was chosen by Cadence Magazine as one of the top ten CDs of 2003. Ken tours widely, performing at the DuMaurier International Jazz Festival, Banlieues Bleues Festival (Paris, France); and on many concert stages including Carnegie Hall. He was principal bassist with the Cascade Festival Orchestra from 1985 – 2002. Ken has also played and/or recorded with artists and orchestras including Bobby Bradford, Nels Cline, Vinnie Golia, Dom Minasi, Alex Cline, Ted Dunbar, and Joseph Jarman.