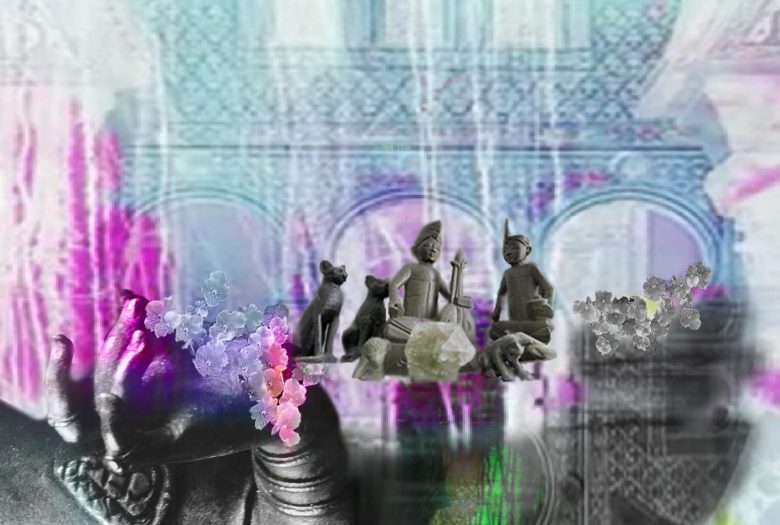 Live version of Ikue Mori’s new album Tracing the Magic. Each piece is inspired by different artists like Joan Jonas, Carrington, Bourgeois, and Toko Shinoda. On the album, each piece features a guest musician adding tracks on Mori’s original tracks remotely and for this live version, they perform altogether like an ensemble.

Ikue Mori arrived to New York in 1977 and joined in the band DNA started playing drums. In mid-’80s started playing drum machines in the unlikely context of improvised music forged own highly sensitive signature style and involved in downtown improving community since. she has collaborated with numerous musicians and artists throughout the US, Europe, and Asia, while continuing to produce and publish her own music.  Ikue won the Distinctive Award for Prix Ars Electronics Digital Music category in 1999 and shortly after started using laptop computer to expand her vocabulary not only playing sounds but create and control the visual work as well. Received grant from the Foundation for Contemporary Arts in 2006, Instant Award for improvising music in 2019. Recent collaboration include John Zorn, Fred Frith, Evan Parker, Zeena Parkins, Sylvie Courvoisier, Satoko Fujii and Joan Jonas.

Pianist-composer Sylvie Courvoisier, a native of Switzerland, has earned just renown for balancing two distinct worlds: the deep, richly detailed chamber music of her European roots and the grooving, hook-laden sounds of the downtown jazz scene in New York City, her home for more than two decades. Few artists feel truly at ease in both concert halls and jazz clubs, playing improvised or composed music. But Courvoisier – “a pianist of equal parts audacity and poise,” according to The New York Times – is as compelling when performing Stravinsky’s iconic Rite of Spring in league with flamenco dancer-choreographer Israel Galván and pianist Cory Smythe as she is when improvising with her own widely acclaimed jazz trio, featuring bassist Drew Gress and drummer Kenny Wollesen. Then there are her ear-opening collaborations with such avant-jazz luminaries as John Zorn, Wadada Leo Smith, Evan Parker, Ikue Mori, Ellery Eskelin, Susie Ibarra, Fred Frith, Andrew Cyrille, Mark Feldman, Ken Vandermark, Nate Wooley and Mary Halvorson. In music as in life, Courvoisier crosses borders with a creative spirit and a free mind; her music-making is as playful as it is intense, as steeped in tradition as it is questing and intrepid. JazzTimes has said: “Courvoisier keeps you on the edge of your seat because it feels like the piano cannot contain her. Her careening solos seem to overwhelm and overflow the keyboard and keep spilling.”

Sae Hashimoto (sa-eh ha-shee-moh-toh) is a Japanese-born percussionist whose multifaceted career extends beyond barriers of genre and classification. Her unique approach to performance is cultivated by her intensive classical training and a decade of freelance experience in NYC performing symphonic, baroque, contemporary, and avant-garde music. Sae is the newest member of Yarn/Wire, a NYC-based piano/percussion quartet that has promoted the creation of new and experimental music for over the past decade. As an orchestral musician, she has appeared as guest timpanist with the New York Philharmonic and the New York City Ballet. Since 2016, she has worked extensively with John Zorn, and has premiered over ten of his works for the vibraphone. Her latest project featuring original music is Archipelago X, an improv-based trio consisting of Brian Marsella on keyboards and Ikue Mori on electronics. Formed in 2020 out of the unique challenges of the Covid-19 pandemic, their self-titled debut album was released in May 2021 on Tzadik label. She holds a bachelor’s and master’s degrees from the Juilliard School, where she studied with Daniel Druckman and Markus Rhoten of the New York Philharmonic.

Charmaine Lee (b. 1991) is a New York-based vocalist from Sydney, Australia. Her music is predominantly improvised, favoring a uniquely personal approach to vocal expression concerned with spontaneity, playfulness, and risk-taking. Beyond extended vocal technique, Charmaine uses amplification, feedback, and microphones to augment and distort the voice. She has performed with leading improvisers id m theft able, Ikue Mori, Sam Pluta, Tyshawn Sorey, Nate Wooley, and C. Spencer Yeh, and maintains ongoing collaborations with Conrad Tao, Victoria Shen, Zach Rowden, and Eric Wubbels. Charmaine has performed at ISSUE Project Room, the Kitchen, Roulette, The Poetry Project, and MoMA PS1, and participated in festivals including Resonant Bodies, Huddersfield Contemporary, and Ende Tymes. She has been featured in group exhibitions including The Moon Represents My Heart: Music, Memory and Belonging at the Museum of Chinese in America (2019). As a composer, Charmaine has been commissioned by the Wet Ink Ensemble (2018) and Spektral Quartet (2018). In 2019, she was an Artist-in-Residence at ISSUE Project Room, and a 2021 Van Lier Fellow at Roulette. Charmaine is currently a member of the Editorial Board of Sound American.

Composer/Performer Ned Rothenberg has been internationally acclaimed for both his solo and ensemble music, presented for the past 40 years on 5 continents. He performs primarily on alto saxophone, clarinet, bass clarinet, and the shakuhachi – an endblown Japanese bamboo flute. His solo work utilizes an expanded palette of sonic language, creating a kind of personal idiom all its own. In an ensemble setting, he leads the trio Sync, with Jerome Harris, guitars and Samir Chatterjee, tabla, works with the Mivos string quartet playing his Quintet for Clarinet and Strings and collaborates around the world with fellow improvisors. Recent recordings include this Quintet, The World of Odd Harmonics, Ryu Nashi (new music for shakuhachi), and Inner Diaspora, all on John Zorn’s Tzadik label, as well as Live at Roulette with Evan Parker, and The Fell Clutch, on Rothenberg’s Animul label.

David Watson is a bagpiper and guitarist, originally from New Zealand. His work includes improvisation, performance and composition. He has a longstanding interest in vernacular practices as viewed through an experimental lens. He has produced the performance series, WOrK for a number of years, in New York and has worked with Ikue Mori for 30 years.