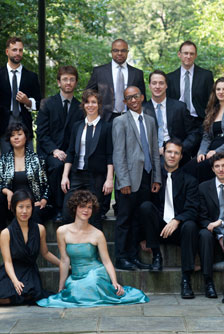 Evocative and otherworldly, Kaija Saariaho’s soundscapes are rich in textural and timbral detail. Known especially for her works for instruments with electronics, ICE presents this rare all-acoustic concert featuring Saariaho’s chamber works up close and personal at Roulette.

Kaija Saariaho is not only among the most important Finnish composers of her time, but must be ranked as one of the leading composers of the late twentieth and early twenty first centuries.  She has produced a vast and much-admired body of work, including the operas L’Amour de loin, which premiered a few years ago and has established itself as a modern classic. She studied composition in Helsinki, Freiburg and Paris, where she has lived since 1982. Her studies and research at IRCAM have had a major influence on her music and her characteristically luxuriant and mysterious textures are often created by combining live music and electronics. Although much of her catalogue comprises chamber works, from the mid-nineties she has turned increasingly to larger forces and broader structures, such as the operas L’Amour de loin, premiered at the 2000 Salzburg Festival, and Oltra mar, commissioned by the New York Philharmonic.

The International Contemporary Ensemble (ICE), described by the New York Times as “one of the most accomplished and adventurous groups in new music,” is dedicated to reshaping the way music is created and experienced. With a modular makeup of 33 leading instrumentalists performing in forces ranging from solos to large ensembles, ICE functions as performer, presenter, and educator, advancing the music of our time by developing innovative new works and new strategies for audience engagement. ICE redefines concert music as it brings together new work and new listeners in the 21st century.

Since its founding in 2001, ICE has premiered over 500 compositions, the bulk of them by emerging composers, in venues ranging from concert halls to galleries, bars, schools and public spaces around the world. The ensemble received the American Music Center’s Trailblazer Award in 2010 for its unique contributions to the field, and received the ASCAP/Chamber Music America Award for Adventurous Programming in 2005 and in 2010. The ICE musicians have served as Artists-in-Residence at the Mostly Mozart Festival since 2011, curating chamber music programs and performing concerts that juxtapose new and old music. The ensemble is also in residence at the Museum of Contemporary Art Chicago through 2013.

With leading support from The Andrew W. Mellon Foundation, ICE launched ICElab in early 2011. This new program places teams of ICE musicians in close collaboration with six emerging composers each year to develop works that push the boundaries of musical exploration. ICElab projects will be featured in more than one hundred performances from 2011-2014 and documented online through DigitICE, a new online venue.

ICE’s commitment to build a diverse, engaged audience for the music of our time has inspired The Listening Room, a new educational initiative for public schools without in-house arts curricula or that need additional support. Using team-based composition and graphic notation, ICE musicians lead students in the creation of new musical works, nurturing collaborative creative skills and building an appreciation for musical experimentation.