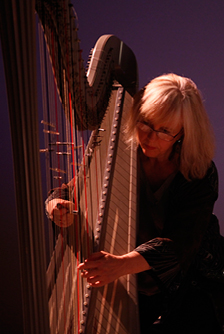 Esteemed California-based composer Anne LeBaron presents the world premiere of Breathtails with FLUX Quartet, vocalist Thomas Buckner, and Ralph Samuelson (on shakuhachi), along with additional works for strings, piano, and harp. Guanajuato-based pianist Ana Cervantes will perform two compositions that she has commissioned from LeBaron: the U.S. premiere of Creación de las Aves, and Los Murmullos (a New York premiere).

This concert will feature three premieres from LeBaron:

“In gripping, short musical phrases, LeBaron captured the moment the soul turns to ice and the buzzing of a swarm of bees. […] a piece not easily forgotten and impossible to ignore.” –Mark Swed, The Los Angeles Times

Anne LeBaron, composer, performer, professor, and writer, has composed six operas and is completing her seventh: Some Things Should Not Move, an autobiographical monodrama with paranormal overtones. Her compositions embrace an exotic array of subjects encompassing vast reaches of space and time, ranging from the mysterious Singing Dunes of Kazakhstan, to probes into physical and cultural forms of extinction, to legendary figures such as Pope Joan, Eurydice, Marie Laveau, and the American Housewife. Acclaimed for her work in instrumental, electronic, and performance realms, her compositions have been performed in dozens of cities around the globe. Her numerous awards and prizes include a Guggenheim Foundation Fellowship, the Alpert Award in the Arts, a Fulbright Full Fellowship, two awards from the Rockefeller MAP Fund for her operas, Sucktion, and Crescent City, and a Los Angeles Cultural Exchange International Grant for The Silent Steppe Cantata, commissioned by a major foundation in the Republic of Kazakhstan. In 2012, the Los Angeles Philharmonic performed her large work for orchestra, American Icons, at the Hollywood Bowl, and the Austrian company Musikwerkstatt-Wien produced her opera, Sucktion. Her latest opera, Crescent City, was performed twelve times in Los Angeles, and was produced as a ‘hyperopera,’ a concept the she has developed during the past ten years. Mark Swed of The Los Angeles Times described Crescent City as “darkly mysterious, troubling yet weirdly exuberant and wonderfully performed,” concluding “She is fluent in grandly operatic manner and in the language of avant-garde…a perspective that is always changing, and always captivating.” Recordings of her music are available on Mode, New World Records, Ear-Rational, Innova, and Music and Art, among others.

Co-chair of the Composition Program in the School of Music at CalArts, LeBaron holds the Roy E. Disney Family Chair in Musical Composition. An accomplished harpist, she is renowned for pioneering methods of developing and implementing extended harp techniques, electronic enhancements, and notation in compositional and improvisational contexts. In the coming year, she will be conducting lecture/workshops in London and Sydney, for harpists to become acquainted with these techniques. LeBaron has written a number of articles on her own work and other subjects, such as “Reflections of Surrealism in Postmodern Musics” (in the book Postmodern Music/Postmodern Thought), “Crescent City: A Hyperopera,” (IAWM Journal), and “The Evolution of Breathtails” (Current Musicology).
annelebaron.com