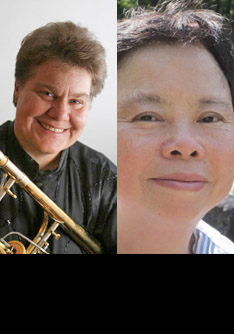 An evening of two innovative women in music on the occasion of International Women’s Day. Chinese-American composer Bun-Ching Lam presents premieres of her new works “Five Songs From Cold Mountain” (for baritone, flute, viola & harp) and “…Like Water” (for violin, piano & percussion). Trombonist Monique Buzzarté presents the world premiere of “Tracing” (2011) by Frances White for trombone and electronic sound, which was funded by the MAP Fund for Creative Arts Performance Projects. The program also includes new works composed for Buzzarté by Sorrel Hays, Alice Shields, Buzzarté herself, and Pauline OlivAneros, with pianist Sarah Cahill.

Described as “alluringly exotic” (The New York Times), and “hauntingly attractive” (San Francisco Chronicle), the music of Bun-Ching Lam has been performed worldwide by such ensembles as the Macao Orchestra, American Composer’s Orchestra, New Jersey Symphony, The Vienna Radio Orchestra, Hong Kong Sinfonietta and the Albany Symphony. Born in Macao, Lam has served as the composer-in-residence of the Macao Orchestra from 2008-2016. She began her piano study in her native city, then further pursued her music education in Hong Kong and the United States. She holds a B.A. degree in Piano Performance from the Chinese University of Hong Kong and a Ph.D. in Music Composition from the University of California at San Diego. She has taught at Cornish College of the Arts in Seattle, and served as Visiting Professor at the Yale University School of Music and at Bennington College.

Monique Buzzarté, trombonist/composer, is an avid proponent of contemporary music. Her recording Fluctuations with Ellen Fullman (Deep Listening 38) was hailed by the Wire magazine as one of the Top 50 Records of 2008. A recipient of a MAP Fund grant, Ms. Buzzarté was also selected by Meet the Composer as a “Soloist Champion” in recognition of her long history of commissioning and premiering new works to expand the trombone repertoire. An author and educator as well as a performer/composer, Ms. Buzzarté: edited the Anthology of Essays on Deep Listening (Deep Listening Publications, 2012) and has published research on the brass music of women composers in addition to receiving artist residencies for the development of an unique interactive performance interface for the trombone. Her advocacy work for women in music included coordinating efforts which led to the admission of women members into the Vienna Philharmonic Orchestra in 1997. Ms. Buzzarté is certified to teach the meditative improvisation practices of Deep Listening. More information at