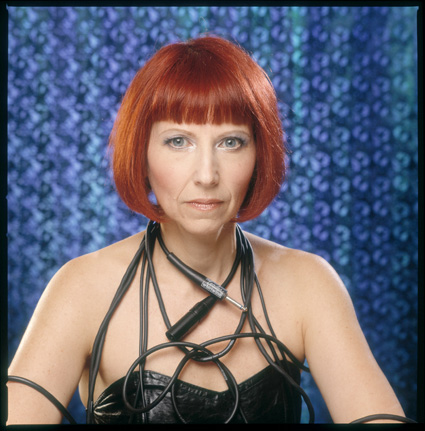 Pianist Kathleen Supové takes off with compositions for piano and soundtrack by Lainie Fefferman, Matt Marks, and Randall Woolf, inspired by Claude Debussy, and featuring the premiere of “Flaming Pairs” by Eric Lyon, part of an evening length work entitled “Earth To Kathy“. PLUS: New concepts for solo tuba technique and sound design from English tubist Melvyn Poore and sound artist Cort Lippe.

Kathleen Supové is one of America’s most acclaimed and versatile contemporary music pianists. She regularly presents a series of solo concerts entitled The Exploding Piano, in which she has performed and premiered works by the world’s leading composers as well as countless emerging ones. The Exploding Piano is a multimedia experience that employs theatrical elements, vocal rants, performance art, staging, electronics, and collaboration with artists from other disciplines. Kathleen has appeared with The Lincoln Center Festival, The Philip Glass Ensemble, Bang On a Can Marathon, Music at the Anthology, The Bill T. Jones/Arnie Zane Dance Company, and other venues, ranging from concert halls to theatrical spaces to clubs. Her most recent CD is INFUSION, released on the International Classics label, which features music for solo piano and electronics. Other recordings can be found on the Tzadik, CRI, Innova, New World, Neuma, Bridge, Centaur, OO, and XI labels.

Melvyn Poore has worked in various situations as tubist, improviser, composer, sound designer and sound diffuser, researcher in Computer Music, computer programmer, recording engineer. Born in England, educated at the University of Birmingham, he moved to Germany in 1991, at first working on his own performance practice projects at the Centre for Art and Media Technolgy ( ZKM) Karlsruhe. He has been active for over 25 years in both the improvised music and New Music scenes: one of his main artistic contributions being the integration of live electronics with acoustic instruments.

After studying Renaissance music in Italy for a year, Cort Lippe studied composition and computer music with Larry Austin in the USA. He also followed composition and analysis seminars with various composers including Boulez, Donatoni, K. Huber, Messiaen, Penderecki, Stockhausen, and Xenakis. From 1980-83 he studied and worked in The Netherlands, at the Instituut voor Sonologie with G.M. Koenig and Paul Berg in the fields of computer and formalized music. From 1983-1994 he lived in France where he worked for three years at the Centre d’Etudes de Mathematique et Automatique Musicales (CEMAMu), founded by Iannis Xenakis, while following Xenakis’ courses on acoustics and formalized music at the University of Paris. Subsequently, he worked for nine years at the Institut de Recherche et Coordination Acoustique/Musique (IRCAM), founded by Pierre Boulez, where he gave courses on new technology in composition, and developed real-time computer music applications. His research includes more than 35 peer-reviewed publications on interactive music, granular sampling, score following, spectral processing, FFT-based spatial distribution/delay, acoustic instrument parameter mapping, and instrument design.