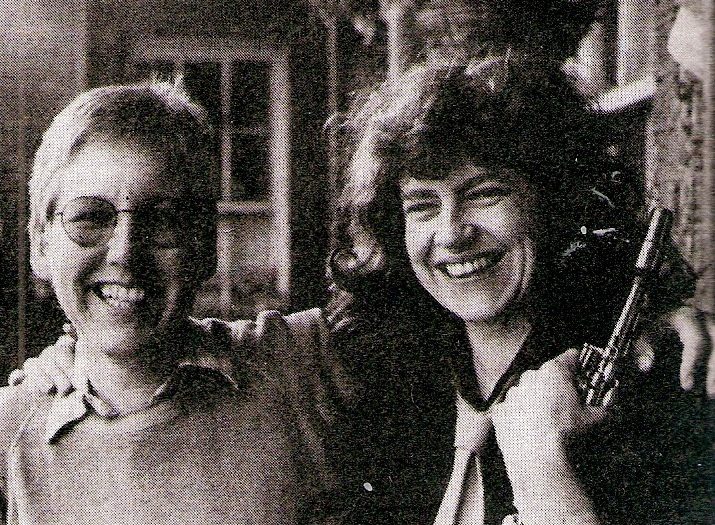 Irene Schweizer’s interest in music was particularly sparked by the dancebands she heard in her father’s restaurant and by the opportunity to investigate the various instruments that had been left lying around. From around the age of twelve she began to experiment with early jazz styles on the piano and then at fourteen started to play the drums. Three years later she was beginning to move to ‘modern jazz’ and in 1960 the group that she was in entered an amateur festival in Zurich. In 1961/62 she worked as an au pair in England and also took piano lessons, particularly with the blind pianist Eddie Thompson from who she learned styles from stride to bebop. At this time she was playing hard bop and soul jazz similar to the music of Horace Silver.

On her return to Switzerland, she formed a trio with drummer Mani Neumeier and Uli Trepte and, through the exposure at the African Jazz Cafe in Zurich to South African players such as Dollar Brand, Louis Moholo, Johnny Dyani and others, and listening to free jazz – particularly Ornette Coleman’s Free jazz – the music gradually took on a new twist. As she told Hale (1997), ‘In 1966 we were invited to the Frankfurt Jazz Festival and we started to get known outside Switzerland. We also started to hear musicians like Peter Kowald, and Peter BrÃ¶tzmann and the sounds of Berlin’s Total Music Meeting. After a while we got tired of playing changes and rhythm. One day when we were rehearsing, something changed. We didn’t really know how it happened; we just left all these systems behind’. Gustafsson (n.d.) reports that from around the same time Schweizer had been very influenced by Cecil Taylor but that once she heard him live, in 1966, she seriously considered giving up the piano as there was nowhere left to go.

Instead, she combined this disappointment with her knowledge of jazz styles and particularly her search for her own creativity, her own style, into a music that developed in a very individual way. As the only woman around at the time she also felt, on occasions, pushed to play more aggressively than she otherwise might have done. From 1968 to 1970 she formed a trio with Pierre Favre and Peter Kowald and after a time Evan Parker joined to make it a quartet. Her performances as a solo pianist began with an appearance at the Willisau Jazz Festival in 1976, and by this time she had also formed her long-standing partnership with Rudiger Carl begun in 1973 and continuing, through a variety of guises, to the present day. Over the years, IrÃ¨ne Schweizer has seemed particularly attracted to perform with percussionists and, on record, there are duos with Han Bennink, Andrew Cyrille, Pierre Favre, Louis Moholo, Mani Neumeier, and GÃ¼nter Sommer.

In the late 1970s Schweizer joined the Feminist Improvising Group whose members already included Lindsay Cooper, Maggie Nichols and Sally Potter. In 1983 FIG evolved into the European Women’s Improvising Group: ‘The name Feminist Improvising Group was chosen because we were all so involved in the women’s movement, but in the ’80s people began to criticise the name and say it was too political… So we renamed it to make it more international and open. The initials EWIG mean eternal in German’ (Hale, 1997). Arising from this an intermittently performing group, Les Diaboliques with Joelle Leandre and Maggie Nichols was formed in the early 1990s. Schweizer was a founding member of the Taktlos Festival and one of the organisers of the Canaille festivals (see, for example, Canaille and Canaille 91). She is also one of the partners in Intakt Records.