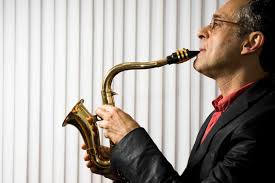 “Ivo’s virtuosity and individual sound – tremendously lyrical – has created a world within the Avant-Garde that is all his own, unlike of anybody else.”
-Gary Giddins, author, critic – The New York Times, Village Voice, The Sun

Perelman learned to play guitar, cello, clarinet, trombone, and piano while young, and concentrated on tenor sax from age 19. He attended the Berklee College of Music for one semester and then dropped out, moving to Los Angeles in 1986. Perelman released his first album in 1989, which featured Peter Erskine, John Patitucci, Airto Moreira, Elaine Elias, and Flora Purim as guests. After the release of his first album he moved to New York City. Perelman has released many critically-acclaimed Abums since then for a number of different labels.

“Not since David Darling and Hank Roberts has there been a more exciting jazz prospect on the cello….it leaves Levin very much the man to watch.”
-Penguin Guide to Jazz

“Cellist Daniel Levin is a major new voice on his instrument and in improvised music.”
– Ed Hazell, The Boston Phoenix

Daniel Levin began playing the cello at age six. After a childhood spent immersed in the classical cello tradition, he started to follow his own musical direction as an improviser and composer after his first experience improvising with a dancer at the age of 19. He has performed and/or recorded with Billy Bang, Borah Bergman, Tim Berne, Anthony Braxton, Rob Brown, Whit Dickey, Mark Dresser, Tony Malaby, Joe Morris, Joe McPhee, William Parker, Warren Smith, Ken Vandermark, and many others. Daniel has recorded as a sideman for Clean Feed, EMANEM, Not Two, and RogueART, and Meta Records. His records as a leader are on Riti Records, Hat Hut, and Clean Feed.

Andrew Cyrille was born in Brooklyn, NY. As well as studying privately, he attended the Juilliard and Hartnett schools of music. He has performed with Jazz artists ranging from Coleman Hawkins, Illinois Jacquet and Mary Lou Williams to Kenny Dorham, Muhal Richard Abrams, Horace Tapscott, John Carter,Mal Waldron and David Murray. In 1964 he formed and association with pianist Cecil Taylor that would last for 11 years. He played drums for many notable dancer-choreogrphers from the mid to late 1960’s. Within the past several years, he has been collaborating and working with musicians such as saxophonist, Archie Shepp, trombonist, Roswell Rudd, trumpeter, Dave Douglas, bassists, Henry Grimes and William Parker, pianists Dave Burrell and Marilyn Crispell, and vibraphonist, Karl Berger.