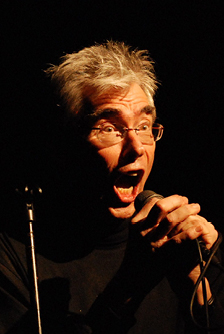 Become a Member for a special pre-concert Members Only Artist Talk with Jaap Blonk where he will discuss his latest composition and entertain questions from attendees. For more information, call the Membership Office at 917.267.0368.

Commissioned by Stanford University, Polyphtong is a showcase of Blonk’s extensive techniques on solo voice. Blonk creates an astonishing range of vocalizations, from dipthongs to his own “cheek synthesizer,” and processes these sounds through a 4-channel mixer, thereby conjuring spatial and temporal layers. Written in the 1920s, Schwitters’ Ursonate proceeds along the structure of classical sonata, in four movements, but with an invented language as its sound material. A stereo CD recording of Polyphtong will be released in September on Elegua Records.

Jaap Blonk (born 1953 in Woerden, Holland) is a self-taught composer, performer and poet. Besides working as a soloist as vocalist and on electronics, Blonk has collaborated with many musicians and ensembles in the field of contemporary and improvised music, such as Maja Ratkje, Mats Gustafsson, Joan La Barbara, The Ex, the Netherlands Wind Ensemble and the Ebony Band. Blonk premiered several compositions by the German composer Carola Bauckholt, including a piece for voice and orchestra; a solo voice piece was commissioned by the Donaueschinger Musiktage 2002; and several collaborations with the computer-based visual artist Golan Levin. Blonk has also produced work for radio and television, includes several commissioned radio plays. His record label, Kontrans, consists of a total of 17 releases so far and other Blonk recordings have appeared on Staalplaat, Basta, VICTO, Ecstatic Peace and Monotype. In 2012, Traces of Speech, a book with an accompanying CD, was published by Hybriden-Verlag, Berlin.
jaapblonk.com

Check out our Blog for an in-depth interview with Jaap Blonk.