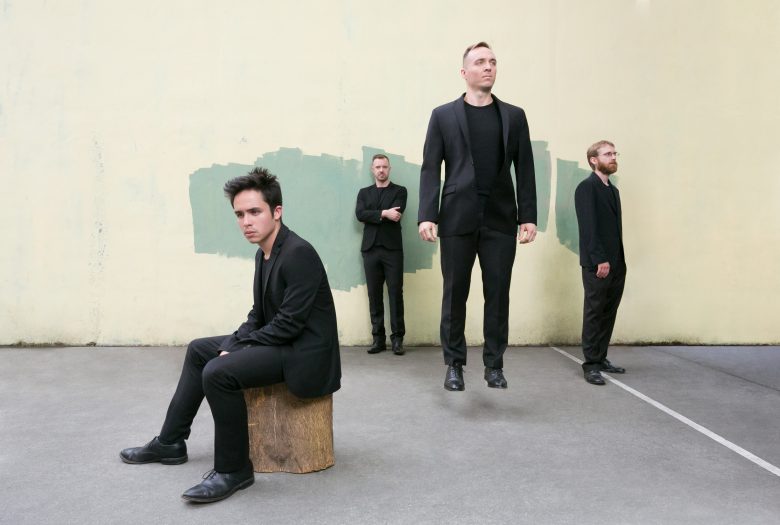 JACK Quartet’s collaboration with Catherine Lamb has become a central artistic relationship, pushing forward the creative work of both the composer and quartet. Lamb’s music represents a facet of the very cutting edge of string instrument writing today. JACK has spent its existence expanding their abilities as chamber musicians and taking part in the conversation about enriching the language of possibilities in string quartet music. That the challenge in Lamb’s music comes through the lens of harmony and not through extended techniques or outre rhythmic demands, but rather a yogic attention to the sustained sound of the strings resonating traditionally, makes it all the more fascinating.

divisio spiralis requires JACK to retune their instruments to create new patterns of resonance as they slowly descend for over an hour, journeying through harmonic landscapes that can be crystalline and fuzzy, throbbing and placid, using microtonal tunings based on the overtone series of a 10 Hz fundamental. As Lamb describes the work, “the first time I discovered Erv Wilson’s 1965 organization of the overtone series as a logarithmic spiral, the image immediately resonated with me as a lucid means to describe harmonic space as numbers in repetition and interaction, generating/blooming outwards with each new prime and composite. I absorbed this image while working on the piece for JACK, and after applying a 29-limit reductionist omission to the tonal palette and situating the four string instruments inside it as distinct resonating chambers, I utilized this image as an inspiration for the total piece.”

Hailed by The New York Times as the “our leading new-music foursome,” the JACK Quartet is one of the most acclaimed, renowned, and respected groups performing today. JACK has maintained an unwavering commitment toward performing and commissioning new works, giving voice to underheard composers, and cultivating an ever-greater sense of openness toward contemporary classical music. In recent seasons, they have been selected as Musical America’s 2018 “Ensemble of the Year”, named to WQXR’s “19 for 19 Artists to Watch”, and awarded an Avery Fisher Career Grant. Through intimate relationships with today’s most creative voices, JACK embraces close collaboration with the composers they perform, leading to a radical embodiment of the technical, musical, and emotional aspects of their work. The quartet has worked with artists such as George Lewis, Julia Wolfe, Helmut Lachenmann, Chaya Czernowin, Philip Glass, and many more. JACK is comprised of violinists Christopher Otto and Austin Wulliman, violist John Pickford Richards, and cellist Jay Campbell.

Catherine Lamb (b. 1982, Olympia, WA. U.S.) is an active composer exploring the interaction of tone, summations of shapes and shadows, phenomenological expansions, the architecture of the liminal (states in between outside/inside), and the long introduction form. She began her musical life early, later abandoning the conservatory in 2003 to study Hindustani music in Pune, India. She received her BFA in 2006 under James Tenney and Michael Pisaro at CalArts in Los Angeles, where she first developed her research into the interaction of tone and continued to compose, teach, and collaborate with musicians (such as Laura Steenberge and Julia Holter on Singing by Numbers). In 2008 she received a W. A. Gerbode Foundation and W. & F. Hewlett Foundation Emerging Composers initiative for Dilations, premiered at the Other Minds festival in San Francisco. She mentored under the experimental filmmaker/Dhrupad musician Mani Kaul until his death in 2011. In 2012 she received her MFA in music/sound from the Milton Avery School of Fine Arts at Bard College in New York. She toured Shade/Gradient extensively and was awarded the Henry Cowell Research Fellowship to work with Eliane Radigue in Paris. In 2013 Lamb relocated to Berlin, Germany where she lives currently, and has written for ensembles such as Konzert Minimal, Dedalus, Ensemble neoN, the London Contemporary Orchestra, as well as the JACK Quartet; while collaborating regularly with Marc Sabat, Johnny Chang (Viola Torros), Bryan Eubanks, and Rebecca Lane. Her first orchestral work, Portions Transparent/Opaque, was premiered by the BBC Scottish Symphony Orchestra at the 2014 Tectonics Festival in Glasgow and was conducted by Ilan Volkov. She completed a series of nine pieces entitled Prisma Interius (2016-18) in which the infinite opening filter from inner to outer perceptions are deeply explored. In 2019 she co-founded the collectively oriented Harmonic Space Orchestra in Berlin. She is a 2020 recipient of the Ernst von Siemens Composer’s prize, a 2018 recipient of the Grants to Artists award from the Foundation for Contemporary Arts, a Staubach Fellow for the 2016 Darmstadt Summer course as well as a 2016-2017 Schloss Solitude Fellow. Her writings/recordings are published in KunstMusik, Open Space Magazine, QO2, NEOS, New World Records, Another Timbre, Other Minds, Winds Measure, Hubro Records, Black Pollen Press, Sound American, and Sacred Realism.

Christopher Otto performs with ensembles including Ensemble Signal, The Cellar and Point, Alarm Will Sound, Talea Ensemble, International Contemporary Ensemble, The Theatre of Eternal Music String Ensemble, Ne(x)tworks, and The Knights. He has premiered and recorded several chamber works by John Zorn and has performed and recorded as soloist in Zorn’s violin concerto Contes de Fées. Christopher has also performed as soloist in Brian Ferneyhough’s Terrain with Ensemble Signal. His violin teachers include Cyrus Forough and Timothy Ying. He is a founder, along with his wife Emily DuFour, of Hutchins East, an ensemble performing on a set of eight proportionally-sized string instruments made by Carleen Hutchins, and has written and arranged several works for the ensemble. He studied composition at the Eastman School of Music with Robert Morris, David Liptak, Martin Bresnick, and James Willey as well as mathematics at the University of Rochester. Christopher has written works in just intonation for string quartet, violin duo, violin octet, violin with electronics, and ensembles of Hutchins instruments. His violin duo was recorded by Erik Carlson and is available on SoundCloud along with his violin octet. An article on his violin octet appears in Arcana VII, an anthology edited by John Zorn. Christopher serves on the faculty of the Mannes School of Music, where JACK is Quartet in Residence.

Praised as a “gifted, adventuresome violinist” by the Chicago Tribune and as a “remarkable, unbelievable violinist/violist extraordinaire” by the syndicated radio program Relevant Tones, Austin Wulliman has gained critical and audience attention through his “wide technical range and interpretive daring” (New Music Box) as a soloist and chamber musician. He first forged his reputation in Chicago with the collective Ensemble Dal Niente, serving as the group’s Program Director, and winning the Kranichstein Music Prize (the grand prize for interpretation) at the Darmstadt Summer Course in 2012. Austin was also a founding member of Spektral Quartet, serving as Ensemble in Residence (as well as Adjunct Instructor of Violin) at the University of Chicago from 2011-2016. Consistently in search of new musical pathways through ensemble work, Austin has collaborated with a wide range of musical voices, from artists like Deerhoof and Julia Holter, to Miguel Zenon and Billy Childs, or Brian Ferneyhough and Kaija Saariaho. Furthermore, he has also been a guest artist with groups such as Eighth Blackbird, and the Chicago Symphony Orchestra’s MusicNow Ensemble. His debut solo release Diligence Is to Magic as Progress Is to Flight was released in 2014 in collaboration with bassoonist/composer Katherine Young. Austin holds degrees from the University of Michigan and Northwestern University, as well as having held fellowships at the Aspen Music Festival and Lucerne Academy. Austin serves on the faculty of the Mannes School of Music, where JACK is Quartet in Residence.

Called “wholesome-looking” by the New York Times, violist John Pickford Richards has gained a reputation for performing new and unusual music around the globe. He was a founding member of the ensemble Alarm Will Sound, and has appeared with artists including Björk and Grizzly Bear and has performed as soloist with the Pasadena Symphony, Armenian Philharmonic, Wordless Music Orchestra, OSSIA, and with the Lucerne Festival Academy Orchestra playing the solo part to Luciano Berio’s Chemins II under the direction of Pierre Boulez. He holds degrees from the Interlochen Arts Academy and Eastman School of Music where his primary teachers were David Holland and John Graham. John serves on the faculty of the Mannes School of Music, where JACK is Quartet in Residence.

Cellist Jay Campbell has been recognized around the world for approaching both old and new works with equally probing curiosity and emotional commitment. His performances have been described as “brilliant and insatiably inquisitive”, “electrifying”, and “prodigious” by the New York Times, and “gentle, poignant, and deeply moving” by the Washington Post. A recipient of the prestigious Avery Fisher Career Grant, Jay performed with the New York Philharmonic in 2013 and was a curator for the New York Philharmonic’s 2016 Biennale. He has soloed in major venues around the globe including Carnegie Hall’s Stern Auditorium, Avery Fisher Hall, and Lucerne’s KKL and performed recitals in Carnegie’s Weill Hall, the Kennedy, Mondavi, and Krannert centers. Dedicated to introducing audiences to the music of our time, Jay has worked closely with some of the most creative minds of the 20th/21st centuries including Pierre Boulez, Elliott Carter, Matthias Pintscher, Kaija Saariaho, and countless others from his own generation. His close association with John Zorn has resulted in over a dozen works written for him including The Aristos, a Pulitzer Prize runner up ¬¬resulting in the release of Hen to Pan (Tzadik), listed in the New York Times Best Recordings of 2015. Jay is the cellist of Junction Trio with violinist Stefan Jackiw and pianist Conrad Tao. He has been a guest at the Marlboro, Chamber Music Northwest, Moab, Heidelberger¬Fruhling, DITTO, and Lincoln Center festivals. Jay serves on the faculty of the Mannes School of Music, where JACK is Quartet in Residence.

This commission has been made possible by the Chamber Music America Classical Commissioning Program, with generous funding provided by The Andrew W. Mellon Foundation. It will be presented virtually and available for free on a variety of streaming platforms. Roulette’s theater is currently closed for public performances as a result of the Covid-19 pandemic and the safety measures that Roulette has put in place to keep staff, artists, and the public safe.