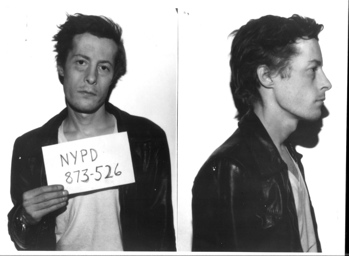 The evening will feature a screening of a new movie, THE SURFACE, a poetic meditation, of water, wind, snow, and trees, featuring a short epic of love found and lost (starring Royston Scott), a work that will likely be forever in progress, entirely shot on black and white 16mm film. (and projected as film – not video!).

The sound track will be mixed live – not in sync – and will feature rarely-heard recordings contributed by such musicians as Philadelphia pianist, Norman Fontleroy, pianist Neal Kirkwood, Marc Ribot, Alvin Curran, three members of Project Zlust (a six-piece band from Macedonia), and more.

Burckhardt directed and produced two features which screened at various international festivals and were distributed on video: IT DON’T PAY TO BE AN HONEST CITIZEN (1984) with William Burroughs, Allen Ginsberg and Vincent D’Onofrio, and LANDLORD BLUES (1986).

In 1990 Burckhardt, Royston Scott and Ms. Mahogany Plywood made THE FRANKIE LYMONS NEPHEW STORY. In 2002 they continued their collaboration with FREEDOM HO, OR HARRIET TUBMAN’S TALE (2002). LOUIS THE FOURTEENTH STREET (2004) is the latest installment in the continuing series, “Black Moments in Great History.” Two more productions are in the works.