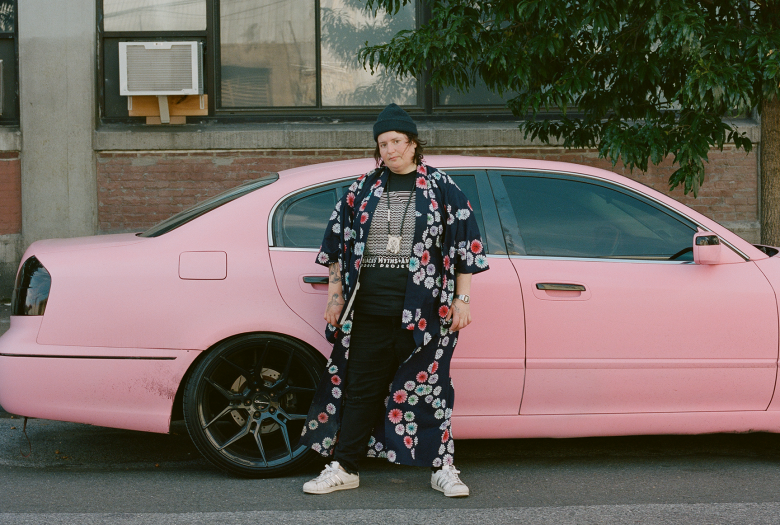 Roulette resident artist Jaimie Branch returns with her quartet, FLY or DIE, performing compositions from each of her acclaimed records—Fly or Die and FLY or DIE II: bird dogs of paradise (IARC 027). Released Oct. 11, 2019 and recorded (mostly) in studio at Total Refreshment Centre and live at Café OTO in London, UK at the end of Fly or Die’s first major European tour. Bird dogs of paradise is the result of a never-satisfied Branch pushing her distinct style of progressive composition to new heights — while also stepping forward as a vocalist for the first time. “So much beauty lies in the abstract of instrumental music,” says Branch in the album’s liner notes, “but being this ain’t a particularly beautiful time, I’ve chosen a more literal path. The voice is good for that.”

Fly or Die* is the compositional outlet of trumpeter, composer, and (now) vocalist, Jaimie Branch. Branch, originally from Chicago and now Brooklyn based, has worked for many years as a sideman and has lead many bands/ensembles in Chicago, Baltimore, and New York. With the release of her debut album as a leader, Fly or Die (IARC 011) in 2017, and the surprise success of that album, she has catapulted onto the main stages of many jazz festivals at home and abroad. The New York Times featured Branch in an article about women jazz instrumentalists in December 2017 and then the following week named her album #4 on the “Best Albums of 2017” year end list. NPR’s jazz critic’s poll awarded Fly or Die best debut of 2017 and NPR music cited Fly or Die in the top 50 albums of 2017 (#47) calling the album “both a fully formed statement and a bolt out of the blue.” The album was also featured on Bandcamp Daily and in the Wire (top ten albums of 2017), Jazztimes, The Los Angeles Times, Stereogum, Aquarium Drunkard, and more. Rolling Stone named Branch in the June 2017 article 10 New Artists You Need to Know—a feat for sure for a jazz musician—saying “[Fly or Die] Sounds like Art Ensemble of Chicago jamming at an art punk loft.”

Jaimie Branch (b. 1983) is a Brooklyn based improvisor, composer, and trumpeter whose work is primarily focused on expanding the sonic and technical limitations of the trumpet in free and improvised musics. Branch received her bachelors degree in music from the New England Conservatory of Music where she studied with John McNeil, Joe Morris, and Steve Lacy. In May 2017, Branch released her debut record as a leader, Fly or Die (International Anthem 011), to critical acclaim. Her follow up release, “Fly or Die II: bird dogs of paradise” was released in October 2019 also on the International Anthem label. Branch believes that all the music in the Universe lives in a cloud just above our heads and that if you listen, you can hear it. Listen. Can you hear it?

Lester St. Louis is a young cello phenom hailing from Queens, NY. An autodidact, St. Louis did not begin playing the cello until he was 16 years old and quickly learned that he has perfect pitch. Encouraged by his high school orchestra teacher, St. Louis dove into the cello with energy and respect. Upon graduating High School, St. Louis audited classes all over the NYC area, studying not only cello, but theory, musicianship, and composition all without the aid of an institution. St. Louis was a Jerome Fund for New Music awardee in 2018 and was commissioned by the prestigious JACK quartet in 2019. He’s a genius and a hell of a nice guy.

Jason Ajemian is a bassist, composer, and vocalist from Richmond, Va now based in Talkeetna, AK. He has toured as a sideman with the likes of Heldo Negro, Joanna Newsome, and Rob Mazurek. And has put out records with his own bands, the Highlife, Folklords, and Who Cares How Long You Sink. Ajemian is known for his robust sound and intuitive time keeping making him an in demand bassist for studio session and film scores. In 2017 Ajemian packed up his New York City apartment for the wilds of Talkeetna, AK where he (in a relatively short time) has become a bush pilot and airplane mechanic at Alaska Floats and Skis. Jason Ajemian may be the only bassist who has landed his own plane on a glacier for a gig in the great frozen north. And man can he play the bass.

Chad Taylor is a composer, educator, percussionist, and scholar who is a co-founder of the Chicago Underground ensembles. Taylor grew up in Chicago where he started performing professionally at the age of 16. Taylor is an active member in Mark Ribot’s band and has performed with Pharaoh Sanders, Fred Anderson, Derek Bailey, Jeff Parker, Malachi Favors, Matana Roberts and so many more. Taylor holds a BFA from the New School in jazz performance and a MFA in jazz research and history from Rutgers University.