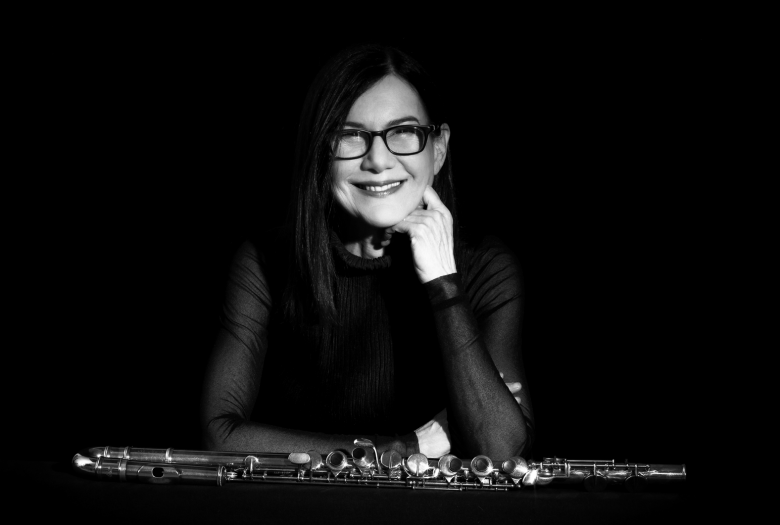 “Baum is that rare double-threat: a musician who can play and write equally well. Her gift for combining complexity with viscerally appealing rhythms and attractive melodies is certainly uncommon”¦ (She) winds through the material with unerring grace, generating long flowing lines that yield nothing to her bandmates.” – Jazziz

Join jazz flutist/compose/arranger Jamie Baum and her award-winning, twelve-year old Septet plus special guest Brad Shepik on guitar – featuring the unusual and colorful instrumentation of flute/alto flute/flute D’amore, trumpet/flugelhorn, alto sax/bass clarinet, French horn and jazz rhythm section- as they perform her new music from he latest project “While We Are Here”. While Ms. Baum has been known for her intriguing, classically-influenced, innovative compositions, her latest project reflects her several trips to South Asia where she had many opportunities to learn and perform with musicians there. Like her earlier projects, her goal isn’t to perform with stylistic authenticity, but to communicate the excitement, spirit and energy felt and heard in those forms. Her recent muse is found in the world-renowned Pakistani musician Nusrat Fateh Ali Kahn who was primarily a singer of Qawwali, the devotional music of the Sufis (a mystical tradition within Islam).

Her recordings as a leader include: Undercurrents (Konnex, 1994) featuring Randy Brecker and Dave Douglas, Sight Unheard (GM, 1997) also featuring Dave Douglas and Kenny Werner which earned 4 stars in DownBeat and was described by JazzTimes as “one of the year’s most innovative projects,” . Her two septet releases include Moving, Forward, Standing Still (Omnitone, 2004) which earned numerous 4-star reviews and was included as one of the Best CDs of 2004 in both DownBeat and Jazziz magazines, and Solace (Sunnyside, 2008) also found on several “Best CD” lists.

Baum has been a consistent winner in both Down Beat’s Critics’ Polls for “Best Flutists” , and the magazine’s Reader’s Polls. She was awarded the Julius Hemphill International Jazz Composers Alliance Award in 1999 and was nominated as “Flutist of the Year” by the Jazz Journalists Association in their 2005, 2006, 2009 and 2010 annual jazz awards. Ms. Baum has performed in over 25 countries including tours in South America, Asia, and South Asia in 1999, ’01, 02, ’03, ’05 and ’10 for the US State Department. In addition, she won the prestigious 2003 New Works: Creation and Presentation Award, a component of the Doris Duke/Chamber Music America Jazz Ensembles Project and their 2007 New Works: Encore Program. She also received a CAP Grant from The American Music Center in 2010 to write music for this project.