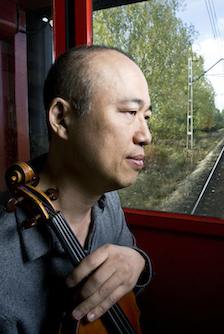 Jason Kao Hwang‘s AMGYDALA explores language, timbre, and space through cross-cultural expressions that focus within and project outwards. The ensemble is named after the brain’s amgydala, which is a mass of nuclei that governs our emotional responses and memories faster and prior to intellectual interventions. The amygdala is where survival instincts reside.

Scored rhythms, harmonies and textures provide a SING HOUSE in which musicians extemporaneously contribute to the overarching narrative. Improvisations may look back, as with thematic development, or launch forward, with new ideas connecting to the next. An improvisation may also look both forward and back, in varied proportions and sequences, to evoke sonic memories and dreams. Improvisers are empowered to transcend interpretation and become an originating source while inextricably unified to the composition’s destiny. What is notated shall be rich and essential to generate this process where development is often defined by improvisations. This is how music grows greater than the imagination of one.

Jason Kao Hwang (composer/violin/viola) has created works ranging from jazz, “new” and world music. The Multicultural Music Group has commissioned Mr. Hwang to compose Tiananmen: The Challenge, an orchestral work to be premiered in 2015. Lifelines, which features his quartet EDGE with contralto voice and reeds, was commissioned by Edgefest (Ann Arbor) and will be released in 2015. Zizal, his duo CD with Ayman Fanous, was voted into the second round of the 2014 Grammy Awards. In 2013 Anthony Braxton’s Tri-Centric Foundation commissioned Shifting Shorelines for the Tri-Centric Orchestra. In 2012, National Public Radio selected Burning Bridge (Innova), his octet of Chinese and Western instruments that was commissioned by Chamber Music America/New Jazz Works, as one of the Top CDS of 2012. The 2012 Downbeat Critics’ Poll voted him “Rising Star for Violin.” In 2011 the critics’ poll of El Intruso voted him #1 for Violin/Viola. That year he released Symphony of Souls (Mulatta), performed by his string orchestra Spontaneous River, and Crossroads Unseen (Eunonymus), the third CD of his quartet EDGE. He also composed If We Live in Forgetfulness, We Die in a Dream, which has received multiple performances by the Momenta String Quartet. In 2010, the NYC Jazz Record selected Commitment, The Complete Recordings, 1981-1983, from a collective quartet that was Mr. Hwang’s first band, as one of the “Reissued Recordings of the Year.” Mr. Hwang’s opera, The Floating Box, A Story in Chinatown was named one of the “Top Ten Opera Recordings of 2005” by Opera News. Mr. Hwang has received support from Chamber Music America, Mary Flagler Cary Charitable Trust, US Artists International, Meet the Composer, the NEA, NJSCA, and others. As violinist, Mr. Hwang has worked with Butch Morris, Pauline Oliveros, William Parker, Anthony Braxton, Reggie Workman, Henry Threadgill, Dr. Makanda McIntyre and many others. 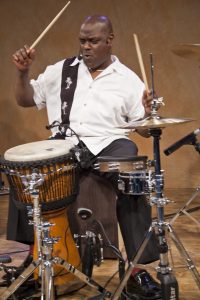 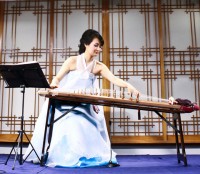