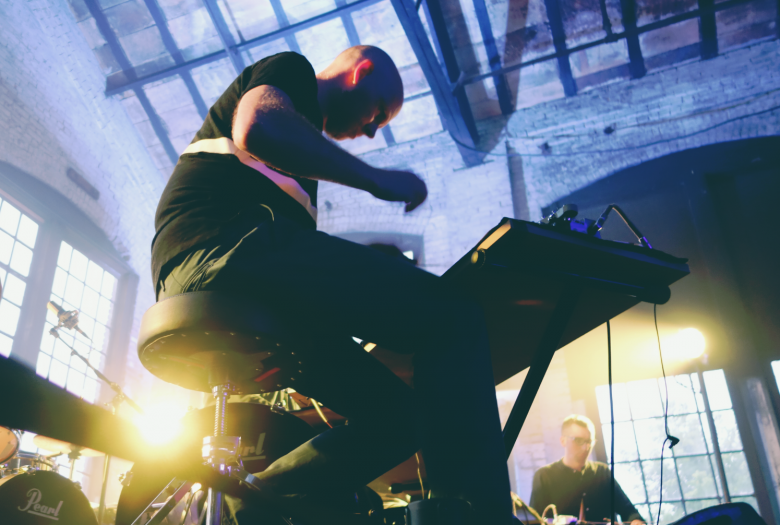 A founding and current member of the influential quartet, Sō Percussion, composer/percussionist Jason Treuting has appeared in performance throughout the world, from the Barbican to Lincoln Center, to the Concertgebouw, DOM Moscow, Walt Disney Hall, and elsewhere. His compositions, widely noted for their compelling rhythmic language and evocative expressivity, have been performed by artists ] including Shara Nova, the JACK Quartet, TIGUE, Shen Wei Dance Arts, and many others.

With innovative multi-genre original productions, sensational interpretations of modern works, more than 20 albums, and an “exhilarating blend of precision and anarchy, rigor and bedlam,” (The New Yorker), Sō Percussion has redefined the scope and role of the modern percussion ensemble. Recent highlights include an acclaimed Trilogy portrait at the Lincoln Center Festival; appearances at Bonnaroo, the Eaux Claires Festival, MassMoCA, and TED 2016; performances of man made with Gustavo Dudamel and the LA Phil; Bryce Dessner’s Music for Wood and Strings at the Barbican in  London; performances of a new work by Caroline Shaw, Narrow Sea, written for the ensemble with Dawn Upshaw and Gilbert Kalish, and returns to Carnegie Hall with the JACK Quartet. Sō Percussion is the Edward T. Cone Ensemble-in-Residence at Princeton University.
www.sopercussion.com

Tigue is a group of three percussionists with a fluid musical identity. The Brooklyn-based trio (Matt Evans, Amy Garapic and Carson Moody) makes their own kinetic and hypnotic blend of instrumental minimalism while opening up the possibilities of their instrumentation through commissioning and collaboration. Tigue’s debut album Peaks was released in 2015 with New Amsterdam Records with highlighted performances at the Ecstatic Music Festival, Bric Celebrate Brooklyn! Festival, and the Zemlika Festival in Durbe, Latvia. Recent commissions and premieres have included works by Molly Herron, Randy Gibson, Jason Treuting, Adrian Knight and Robert Honstein alongside collaborative ventures with Kid Millions and visual artist / sculptor Michael Mercil. These works have been presented in concert halls, galleries, black box theaters and universities throughout the country including EMPAC, Roulette, The deCordova Sculpture Park and Museum, Noguchi Museum, Yale School of Music, and Princeton University.  Praised for their focused and “high octane” performances (New York Times), the Ohio-born band members have worked together since they were practically children.
www.tiguemusic.com

Praised as “spectacular” by the Los Angeles Times and “extraordinary” by the Ventura County Star, the Times describes percussionist Ji Hye Jung as “a centered player who can give the impression of being very still yet at all places at once”. Ms. Jung began concertizing in her native South Korea at the age of nine where she performed more than 100 concerts including solo appearances with every major orchestra in Korea.  Soon after coming to the United States in 2004, Ms. Jung garnered consecutive first prizes at the 2006 Linz International Marimba Competition and the 2007 Yale Gordon Concerto Competition. With percussion repertoire still in its formative stages, Ms. Jung feels strongly about collaborating with composers to further the creation of a new voice for the art form.  She has commissioned and premiered works by several important composers including, Kevin Puts, Alejandro Viñao, Paul Lansky, John Serry, Lukas Ligeti, and Jason Treuting.  In 2013 she made the premier recording of Michael Torke’s marimba concerto Mojave and in 2014 recorded Phillip Glass’ Concerto Fantasy for Two Timpanists and Orchestra for the Naxos label.

Adam Groh, a native of St. Louis, Missouri, is a percussionist with a diverse performing and teaching background. He is an ardent supporter of new solo and chamber music for percussion, and has commissioned and premiered works by composers such as Marc Mellits, Jason Treuting, Ian Dicke, Ethan Frederick Greene, Clif Walker, Eli Fieldsteel, Christopher Cerrone, Brian Nozny, and Chris Ozley, amongst others. As an active chamber musician, Adam has performed alongside So Percussion, members of the Bang on a Can All-Stars, and with the Austin Chamber Music Center. Adam is currently Assistant Professor of Percussion at Western Carolina University in Cullowhee, North Carolina. Prior to arriving at WCU, Adam served on the faculties of Graceland University, Sam Houston State University, and Texas A&M University – Kingsville.