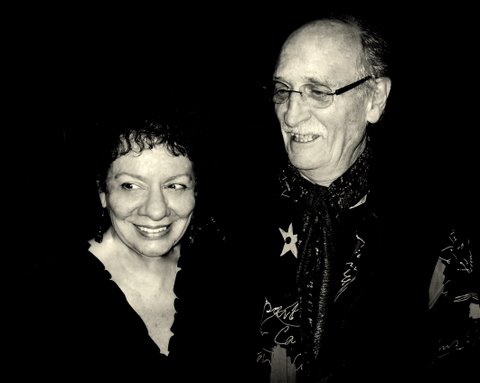 Jay Clayton (voice) and Jerry Granelli (drums) are two seasoned, jazz-based players who compose as they go and produce sparkling music of concise, classic proportions, enriched by a contemporary apprehension of Third World and classical innovations. Each musician here has a supreme command of timbre and an ability to get inside the sound of the other. Listening to them explore, expand and contract a musical idea, it’s easy to forget that you’re listening to just a singer and a drummer.

“More than 20 years after her debut recording All Out, Clayton is still the most adventurous singer in jazz, a specialist in wordless improvisation who’s also expert in distending and finding new meanings in the melodies and lyrics of classic popular songs.”
Francis Davis, The Village Voice, July 14, 2004

Jay Clayton is an internationally acclaimed vocalist, composer, and educator, whose work boldly spans the terrain between jazz and new music. In 1963 she began her career performing the standards on the vibrant New York music scene. However, she quickly became a prominent part of the free jazz movement. Her work in these two worlds led to the development of a highly personal, wordless vocabulary later enhanced by her innovative use of electronics. Jay has gained worldwide attention as both performer and teacher. With more than 40 recordings to her credit, Clayton has appeared alongside such formidable artists as Muhal Richard Abrams, Steve Reich, Kirk Nurock, Julian Priester, Jerry Granelli, Jane Ira Bloom, Gary Bartz, Jack Wilkins, George Cables, Fred Hersch, Gary Thomas, tap dancer Brenda Bufalino as well as fellow vocalists Jeanne Lee, Norma Winstone, Urszula Dudziak and Bobby McFerrin.

She has taught extensively throughout the world and continues to do so. She has co-taught with Sheila Jordan at the Vermont Jazz Workshop, Jazz in July in Massachusett and the Banff Centre in Canada. Jay was on the jazz faculty of Cornish College of the Arts for 20 years. She is currently on the jazz faculty at Peabody Institute in Baltimore. Her book, Sing Your Story: A Practical Guide for Learning and Teaching the Art of Jazz Singing, was published by Advance Music in 2001. Her many accomplishments include grants from the National Endowment for the arts, Meet the Composer, CAPS, and in 2004 received the New Works: Creation and Performance grant from Chamber Music America.

Jerry Granelli
The past decade has been good to Jerry Granelli- Jazz Times magazne calls Granelli “one of those uncategorizable veteran percussionists who’s done it all”. A Canadian cihzen since 1999, Granelli burns with an intensity fueled by a passion for “the pursuit of the spirit of spontaneity which drives the player.” A veteran of the West Coast jazz scene, Granelli’s recent flourish of recordings has resulted in a truly remarkable collaboration between the generations. Jerry Granelli’s story is one that follows the evolution of the Wast Coast jazz scene. His legend begins in 1948 with Gene Krupa- After spending a day with the influential drummer the 8-year old Granelli recognized his passion Fkn$ng out in the legendary San Francisco nightclub, the Edge Water, soaking in the big band sounds of Duke Ellington, Benny Goodman and others, his passion grew, eventually leading him to
legendary drummer for Dave Brubeck – Joe Morello. After two years as Morello’s star pupil, Granelli became a highly sought after session player, eventually playing recording and touring with the Vince Guamldi Band Granelli provides the unmistakable steady swing beats for the classic Charlie Brown ‘Peanuts’ theme song Following the twisted trail of the volatile West Coast scene of the 60’s, Granelli joined the Denny Zeitlin Trio, a group that included bassist Charlie Gaden. A hugely successful recording and touring band, they won Group of the Year in Dor,vnbeat magazine’s Critics
and Readers Poll in 1965, beating out the Miles Daiis Group – Through the 60’s and into the 70’s, Granelli rvorkod as a session player slamming solid backbeats for many of the innovators of the scene. Ornette Coleman, Mose Allison, Lou Rawls and Sly Stone- An innovator himself Granelli always finds himself at the center of the scene – musical or otherwise: as the opening act for Lenny Bruce, an opening slot at the 1972 Grateful Dead tour, Granelli was right there as the West Coast focus shifted from the cool jazz styles to the beginnings of psychedelia with the Jefferson Airplane and the Grateful Dead Through the 70’s and into the 80’s, Granelli focused on teaching in various prestigieus music programs, bringing his insider knowledge to hundreds of hungry students at the Naropa Institute in Boulder Colorado. Seattle’s Cornish Institute and the Conservatory in Halifax, Nova Scotia and as a professor at the Hochschule der Kunst in Berlin.