Jen Shyu: CRY OF THE NOMAD 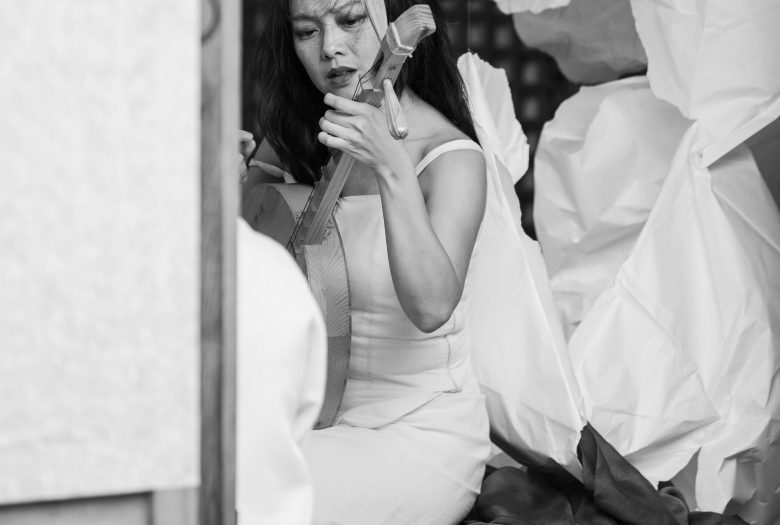 Jen Shyu: CRY OF THE NOMAD

“CRY OF THE NOMAD”

Themes of physical helplessness, spiritual displacement, isolation, and forced love run through the lives of both ancient and recent ancestors which merge in this ritual for voice, dance, and string ensemble. The piece connects the characters of Shyu’s late Taiwanese grandfather born in 1914
with Lady Wen-chi, a princess abducted by nomads from her Han Dynasty kingdom around 195 A.D. The commissioned work brings to life a fourteenth-century handscroll painted to accompany the poetry of Liu Shang illustrating Lady Wen-chi’s story; and intertwines it with a man’s 20th-century life culminating in spiritual quest. Commissioned by Roulette with funds provided by the Jerome Foundation.

Born and raised in Peoria, Illinois, from immigrant parents of East Timor and Taiwan, Jen Shyu is a New York-based vocalist, dancer, composer, and band leader. Having studied dance from age 6, piano from age 7, and violin from age 8, she performed as piano soloist at age 13 the Finale of Tchaikovsky’s Piano Concerto No. 1 with the Peoria Symphony Orchestra and placed 6th at age 9 at the Stravinsky International Piano Competition. Jen studied opera at Stanford University (B.A. 2000), Oxford University, England, the Mozarteum in Salzburg, Austria, and the Lake Placid Institute in NY. Having produced her debut album in the Bay Area in 2002, Jen has traveled to Taiwan twice since 2001 to research Taiwanese folk and aboriginal music, her second trip sponsored by the Asian Cultural Council. Her two trips to Cuba included studies of Afro-Cuban music and dance as well as Chinese-Cuban history. She studied dance in Brazil with Rosangela Silvestre and Vera Passos and worked with late poet Sekou Sundiata on his last work, “51st Dream State.” Jen is currently fostering her group Jade Tongue as well as composing for and performing with actress/performance artist Soomi Kim on her piece “Lee/gendary” inspired by Bruce Lee. She has also recorded and toured internationally with saxophonist Steve Coleman and Five Elements since 2003.

Jennifer Choi has charted a career that breaks through the conventional boundaries of solo violin, chamber music, and the art of creative improvisation. The New York Times has described her as a player with”brilliance and command,” and the Seattle Weekly applauded her performance with the words “intense, spectacularly virtuosic play.” As a soloist, she has performed with orchestras across the US, and as a recitalist and chamber musician, she has performed in venues worldwide like the Library of Congress in Washington D.C., Alice Tully Hall in New York, the Mozartsalle in Vienna, and the RAI National Radio in Rome. In 2000, she was ‘Winner’ of the Artist International Award, leading to a debut recital in Weill Hall at Carnegie Hall.

Jennifer resides in New York City and is a prominent fixture in its new music scene. She is regularly invited to premiere and record works by contemporary composers such as John Zorn, Anthony Coleman, Elliot Sharp, Susie Ibarra, and Randall Woolf who recently wrote a work for violin and video dedicated to Jennifer. Highlight appearances have included performances at Columbia University’s Miller Theater and at the Guggenheim Museum where she gave the World Premiere of ‘Goetia’ for solo violin by John Zorn.

Miles Okazaki (b. 1974) grew up in the Pacific Northwest, in the small waterfront town of Port Townsend, Washington. As the son of a painter and photographer, his first exposure to art was visual. He began teaching himself classical guitar and learning popular songs at the age of six, developing his technique and musical ear at an early age.
During college years at Harvard University, Okazaki began developing the ideas of combining and blending a variety of disciplines which is the foundation of his musical and compositional style. He studied Mathematics, Literature and became drawn back to the Visual Arts. During these years he began to write music and studied privately with composer Anthony Davis. Moving to New York after college, he entered the graduate program at Manhattan School of Music, studying with guitarist Rodney Jones.
Over the next ten years Okazaki has participated in a wide spectrum of projects, working in jazz groups (Stanley Turrentine), funk/R&B (Lenny Pickett), traditional vocalists (Allan Harris, Jane Monheit), Indian Music (Samir Chatterjee), free improvisation, Brazilian music, and with leaders of the current New York Scene (David Binney, Dan Weiss, Jen Shyu). His awards include 1st place in the Fish-Middleton Jazz Competition, 2nd place in the Thelonious Monk Jazz Competition, and a New Works grant from Chamber Music America. His debut album Mirror received a “critics pick” feature in the New York Times, a “winning spin” cover spot in HotHouse magazine, and was featured in Downbeat, JazzTimes, The Village Voice, and many other publications.

Rubin Kodheli, cellist and composer of Blues in Space has graduated from
Juilliard in classical music. Ever since finishing his degree he has been
performing with Henry Threadgill, Dave Douglas, Makoto Ozone, Wadada Leo
Smith, Wyclef Jean and many others.

Thomas Morgan, born in Hayward, California in 1981, began to study
the cello at the age of seven and continued until the age of fourteen,
when his attention turned to the double bass. In May of 2003
he completed a Bachelor of Music degree at the Manhattan School of Music,
where he studied bass with Harvie S and music theory with Garry Dial.
He has also studied with Ray Brown and Peter Herbert. Thomas regularly
plays concerts in New York and abroad with such artists as David Binney,
Steve Coleman, Paul Motian, Joey Baron, Craig Taborn, Dan Weiss,
Tyshawn Sorey, Terumasa Hino, and Kenny Werner.

Satoshi Haga grew up in rural Japan. Once in New York, he studied mime with
Moni Yakim and Paul J. Curtis, and ballet with Finis Jhung and Maggie Black..
He has performed with the New York Pantomime Theatre, The American Mime
Theatre, Jeanette Stoner & Dancers and many independent artists. He has also
performed his solo work in many venues in New York, including Joyce SoHo,
P.S. 122, 92nd Street Y, Mulberry Street Theatre, Dancenow, Brooklyn Arts
Exchange and Japan Society . In 1997, Mr. Haga presented his first solo
concert, “One-Man Plays Without Words,” and in 2001,”A SoloCollection” at
Joyce SoHo. The following summer he was a Bessie Schoenberg artist
-in-residence as choreographer at The Yard on Martha’s Vineyard, and the
piece he created there, “City Square”, was later presented by P.S. 122 and
The Japan Society. He has also choreographed and directed exhibitions at the
Tokyo Motor Show. In the spring of 2003, a concert entitled “SoloSolo Duo”
was presented at Joyce SoHo. His latest work “IRO-IRO” was commissioned
and presented by Mulberry Street Theater, with funding support from the
Jerome Foundation. In 2005, “Awaking Little Bird” was presented by Aaron
Davis Hall and a duet version of “IRO-IRO” was performed at Inside/Out at
Jacob’s Pillow. Mr. Haga has studied Balinese Dance with Nyoman Cerita in
Bali, is currently studying Yang style Tai Chi with Master C.K Chu, Chen
style with Master Adam Wallace and for the past year has joyfully taken up
the practice of juggling. He is also a sculptor, a clown and an artist.