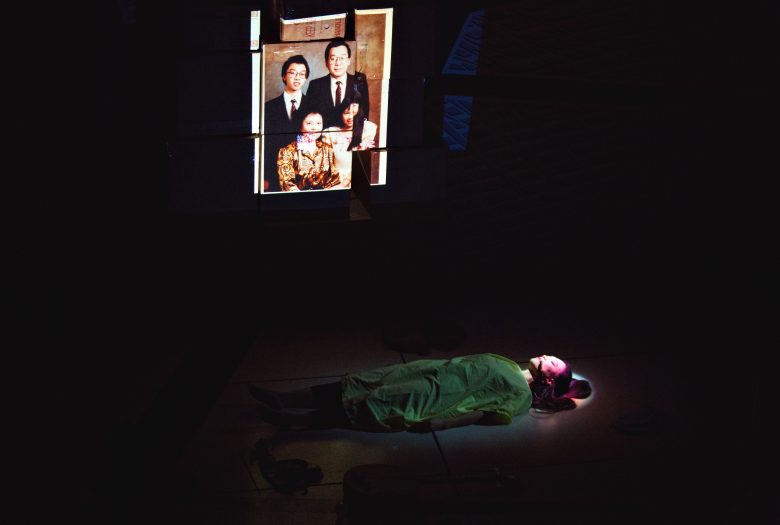 Jen Shyu and Jade Tongue celebrate their deeply personal album Zero Grasses: Ritual for the Losses on Pi Records with an evening of music at Roulette. The album and subsequent performance marks the long-awaited return of Jade Tongue, an ensemble made up of musical innovators—Ambrose Akinmusire, Mat Maneri, Thomas Morgan, and Dan Weiss—with whom Shyu has created music with for over a decade. They last appeared on her groundbreaking and highly acclaimed 2015 Pi release Sounds and Cries of the World, which NPR called: “no drive-by encounter between musical cultures, no cherry picking of exotic licks. This is research and experience, absorbed and reimagined.”

Zero Grasses: Ritual for the Losses is a mourning and reckoning for women and people of color, across time and into this pandemic. This album is dedicated to her father, 徐澤濱 Tsu Pin Shyu (January 19, 1941–April 2, 2019), who passed away unexpectedly during a nap at his home in Houston. Her mother tried to wake him, even banging a pot with a spoon, but finally called for help. At the time, Shyu was doing research in Japan for Zero Grasses when she received an email from the county sheriff informing her of her father’s death. A few weeks after his memorial, she was emptying her father’s closet when she discovered her childhood diaries. Reading them transformed Zero Grasses into a coming-of-age story about ambition, legacy, racism, sexism in the industry, fertility, and the mother she sought to become. It’s an investigation of life, as it was her father who inspired her to live life as she envision it.

The album encompasses Zero Grasses, which was commissioned by John Zorn and premiered on October 30, 2019. It also includes two songs (“Display Under the Moon” and “A Cure for the Heart’s Longing”) from Shyu’s solo theatrical work Nine Doors. “Living’s a Gift” and “Lament for Breonna Taylor” were created in 2020 at the onset of COVID-19 and in outrage over the murders and gross injustices against Black lives. “The Human Color” is a ballad  about the history of Chinese indentured servants, who were kidnapped by Portuguese and Spanish colonizers, and labored alongside African enslaved peoples in Cuba in the 19th century. Revisiting this piece speaks to this moment in history: a call for solidarity in the ongoing war against racism.

For the original Zero Grasses production (commissioned by John Zorn for his Stone Commissioning Series and premiered at National Sawdust October 19, 2019), the director was Alexandru Mihail with set and projection design by Kristen Robinson and Kate Campbell, costume design by Elizabeth Caitlin Ward, and lighting design by Solomon Weisbard. Jen Shyu adapted the script with the help of dramaturgs Emily Reilly and Julia Bumke, and Neil Beckmann was also Keynote Operator for this album release performance of Zero Grasses: Ritual for the Losses.

Guggenheim Fellow, USA Fellow, Doris Duke Artist, multilingual vocalist-composer-multi-instrumentalist-dancer Jen Shyu was the first female and vocalist bandleader on Pi Recordings and has produced eight albums, performed at Carnegie Hall, Lincoln Center, Metropolitan Museum of Art, National Theater of Korea among others, and is a Fulbright scholar speaking 10 languages. Before the pandemic, she was touring her solo Zero Grasses (commissioned by John Zorn) and giving free workshops in schools and for families across 50 states and has since moved her teaching+projects to Patreon (https://www.patreon.com/jenshyu), where she hosts global workshops + salons on Zoom. She co-founded Mutual Mentorship for Musicians (https://mutualmentorshipformusicians.org/) with Sara Serpa, and together with M³ Editor-in-Chief Jordannah Elizabeth is working to empower and elevate underrepresented musicians around the world.

Brooklyn-bred trumpeter Adam O’Farrill, 26, has emerged as a “rising star as a player and composer” (PopMatters) and “a blazing young trumpet talent” (The New York Times). Beginning his career in his teenage years performing with his father, the Grammy-winning pianist and composer Arturo O’Farrill, Adam has gone on to work with a wide range of artists such as Rudresh Mahanthappa, Mary Halvorson, Mulatu Astatke, Brasstracks, Samora Pinderhughes, and Onyx Collective. His most recent album, 2018’s El Maquech (Biophilia Records) received critical acclaim, including the Wall Street Journal, who wrote that “the band presents rambunctious music that is equally rustic and modern,” as well as receiving Best of the Year mentions from The Boston Globe and the NPR Jazz Critics Poll. In the spring of 2019, O’Farrill won the Downbeat Critics Poll for Rising Star Trumpeter. As a sideman, Adam’s discography includes Mary Halvorson’s Artlessly Falling, Rudresh Mahanthappa’s Bird Calls, Arturo O’Farrill’s Cuba: The Conversation Continues, Stimmerman’s Goofballs, Tarun Balani’s The Shape of Things to Come, as well as upcoming releases from Anna Webber and Aaron Burnett.

Thomas Morgan is a double bass player with a unique approach to the instrument and an exceptional musical understanding. He has played on more than a hundred recordings and toured all over the world as a member of bands led by Bill Frisell, Jakob Bro, Craig Taborn, Masabumi Kikuchi, Jim Black, Dan Weiss, Paul Motian, John Abercrombie, Dave Binney, Steve Coleman, and Tomasz Stanko, among many others. It is Thomas Morgan’s extraordinary way of being in the moment in music and putting his own signature on it that has made him one of the most in demand jazz bassists on the international scene.

Shifting Foundation grantee Dan Weiss has been hailed as one of the top five jazz drummers in The New York Times, and his large ensemble recording Fourteen made the top ten list of their best recordings of 2014. Weiss’s innovative drumming and forward-thinking compositions have been pushing musical limits for years. With his piano trio, he’s released two recordings entitled, Now Yes When (2006) and Timshel (2011), which have been critically acclaimed for their unique approach to song structure and endless creative improvisation. Weiss also leads his sixteen-piece large ensemble that features some of NYC’s most gifted musicians. The two albums Fourteen (2014) and Sixteen: Drummers Suite (2016) released on the Pi record label have made numerous critic polls. His newest project features Craig Taborn, Matt Mitchell, Ben Monder, and Trevor Dunn and is an amalgam of jazz, metal, and new music. The recording will be released on the Pi record label in the Spring of 2018. Weiss has been studying tabla under Pandit Samir Chatterjee for twenty years. He has performed with the legendary Ashish Khan and Ramesh Misra and recorded a solo tabla cd “3dcd” (2007). Weiss recorded two groundbreaking CDs Teental Drumset Solo (2005) and Jhaptal Drumset Solo (2011) where he performs classical Indian repertoire on drum set. Weiss was named ‘The Top Up and Coming Percussionist’ 2 years in a row in the 60th and 61st annual Downbeat’s Critic’s Poll and earned a spot in Modern Drummer’s coveted Top 5 Jazz Drummers of 2014.