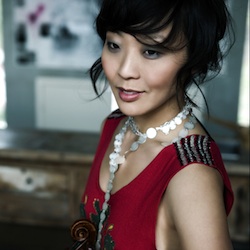 Jennifer Choi has charted a career that breaks through the conventional boundaries of solo violin, chamber music, and the art of creative improvisation. As fearless about championing the avant-garde and experimental music as she is traversing between genre lines, she is establishing herself as a diverse violinist of the 21st century. The New York Times has described her playing with the words “brilliance and command,” the Seattle Weekly applauded her “intense, spectacularly virtuosic play,” and the Boston Globe reported that as “a leading New York new music violinist, Jennifer Choi play[s]… with fiery authority”.

As a soloist, Jennifer has performed with orchestras across North America including the Oregon Symphony, the Vancouver Symphony Orchestra, the String Orchestra of New York City (SONYC) among others. In 2000, she was ‘Winner’ of the Artist International Award, leading to a debut recital in Weill Hall at Carnegie Hall. As a recitalist, she has performed in venues worldwide including the Royal Academy of Music in London, the Library of Congress in Washington D.C., Alice Tully Hall in New York, the Mozartsalle in Vienna, and the RAI National Radio in Rome.Â

A prominent fixture in the NYC new music scene, Jennifer is regularly invited to perform, premiere, and record solo and chamber works by contemporary composers of this generation including John Zorn, Neil Rolnick, Anthony Coleman, Susie Ibarra, Keeril Makaan, and Randall Woolf with whom she won the 2006 New York State Music Fund grant to premiere a new solo violin and video work entitled ‘Holding Fast’.Â  Highlight appearances have included performances at the Guggenheim Museum where she gave the World Premiere of ‘Goetia’ for solo violin by John Zorn, Columbia University’s Miller Theater, the ‘Interpretations Series’ at Merkin Hall, and multiple performances at NYC venues for contemporary music such as the Stone, Le Poisson Rouge, Roulette, and the Issue Project Room.Â  Jennifer has recorded over a dozen albums for TZADIK record label including the music of John Zorn, Christian Wolfe, Elliot Sharp, Leo Wadada Smith, and the Susie Ibarra Trio.