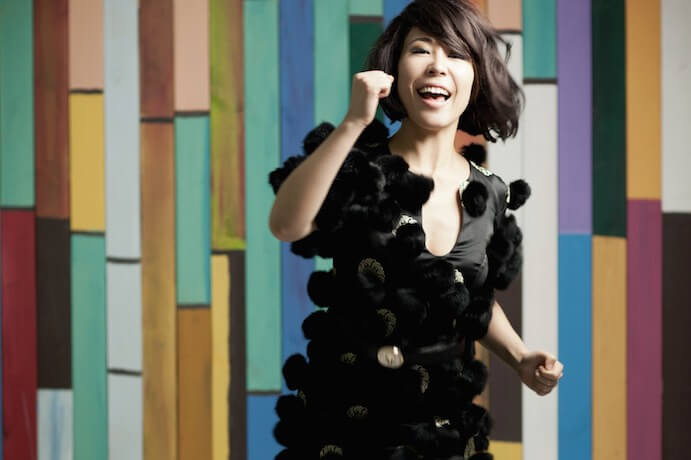 Intervals are not only the physical distances between pitches. What worth contemplating is the different use of intervals by composers: its succession; its variety of intensity; its colors, etc.

This concert presents the music by great composers with their unique treatments of intervals, thus showing expression, emotion and even ecstasy. After one follows and explores the depth of intervals, one might discover the final result: between-interval. Tonight’s concert also marks a first time experiment of the collaboration of active music and timeless but moving paintings by artist Relja Penezic.

Jenny Q Chai is a pianist specializing in contemporary music. She has performed in major concert halls in the U.S. including Carnegie Hall with Curtis Symphony Orchestra under Andrea Previn, Steinway Hall and Rockefeller Center in New York, Kimmel Center, Academy of Music, Field’s Hall in Philadelphia, Kneisle Hall in Maine, Kennedy Center in Washington D.C. and Kravis Center in Florida. She has also toured in China and Korea. In Europe she has performed in Darmsdadt International Festival for New Music, The Gaudeamus New Music Festival, Amsterdam, The Logos Tetrahedron Concert Hall, Ghent, Palau de la MÃºsica, Barcelona, Shanghai Grand Theater, Shanghai and Rodin Museum, Seoul among many others. Jenny Q Chai is an active competitor in the circuit of international piano competitions. Her awards include Logos Award 2008, Kil’s International Piano Competition in Sweden; Steinway Young Artist International Competition and Five Towns Art & Music Foundation International Piano Competition in New York, among many others. In Ghent, Belgium, she was given the Logos Award for the best performance of 2008.

Works written for her which she has premiered include Exercise in Deism by John Slover , Intimate Rejection by Ashley Fu-Tsun Wang and Scatura Nera by Jean-Olivier Begin. Ms. Chai introduced the prepared piano to a Chinese audience with the world premier of Mallet Dance by John Slover in Shanghai Concert Hall. New works soon to be performed by Ms. China include Victoria Jordanova’s five pieces followed by a recording released in 2010 and a tour in Germany and Norway with works by Hartmut Schulz and Dagfinn Koch, among others. Ms. Chai’s 2009 and 2010 engagements include solo performances at the Tank Experimental Music Center, Roulette, Phillips Collections Sunday Concert Series, South Nyack Recital Series and Manhattan School of Music in the U.S.; Muziekcentrum De Toonzaal and Galerie Marzee in the Netherlands; Logos in Belgium, a tour in Norway and six performances with Ensemble 20/21 in Germany, among others. Three recordings of Ms. Chai will be release on Arpaviva, 8bells and the Deutschlandfunk in 2010.

Ms. Chai earned her Bachelor’s degree at Curtis Institute of Music and her Master’s degree at Manhattan School of Music where she is a D.M.A. candidate . From October 2009, Ms. Chai has taken up advanced studies with pianist Pierre-Laurent Aimard in the Musikhoschule KÃ¶ln Neu Musik Interpretation program.