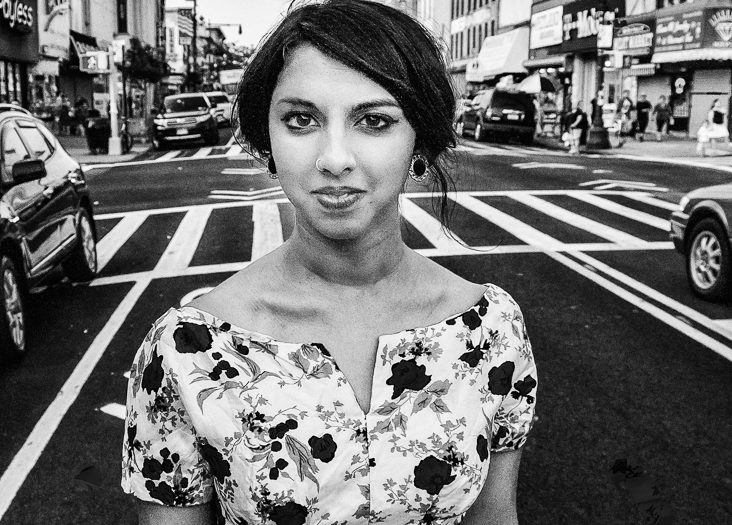 The quartet performing the compositions of vocalist Amirtha Kidambi (Seaven Teares/Elizabeth-Caroline Unit) lies nestled in a venn diagram of musical spheres and communities in New York City. Her and her collaborators saxophonist Matt Nelson (Battle Trance/Tune-Yards), bassist Brandon Lopez (Vape Drip) and drummer Max Jaffe (JOBS, Unnatural Ways) have crossed paths in the DIY underbelly, in incestuous circles of free improvisers, and uncomfortable chairs in concert halls of angular new music. The instrumentalists chosen for this project draw from a wide variety of vocabularies from hip-hop to free improv, each bringing their own highly individual sound to the group. The quartet uses composed material and loose structures as a template for improvisation. Oscillating between worlds of modal Sufi-like circular grooves and free improvisation to jagged rhythmic precision and punishing brutality, Thyagaraja, Coltrane or Stockhausen could be equally suspected as illegitimate fathers of their sound.

Amirtha’s background in Hindu devotional singing or Bhajan, led her to use the Indian harmonium as accompaniment and compositional tool. Amirtha has been singing with the harmonium since the age of 4 and has a deep connection to its timbre, intonation and mystical qualities. She was also inspired in part by her work with Darius Jones and the Carnatic tradition, to use abstract syllables to liberate the voice from specific literal ideas to facilitate unhindered improvisation, and to allow the listener a greater range of interpretation. Her music has developed through years of dedicated collaboration with bands, composers and other improvisers, finally leading to her own individual sound. She owes her developing sound to her cultural traditions, 90s R&B, John and Alice Coltrane, Edgard Varèse and many other musical languages and influences. The name Mother Tongues partly refers diversity of what she feels are equally native musical languages, that have found their expression in these compositions. Her actual mother tongue is Tamil.

Amirtha Kidambi is invested in the performance, investigation and creation of exploratory musics, ranging from Carnatic vocal, free improvisation, experimental art rock and new music. As a soloist, collaborator and ensemble member in groups such as, the early music influenced dark folk band Seaven Teares, the homemade analog percussion and light group Ashcan Orchestra, and vocal quartet Elizabeth-Caroline Unit, Amirtha has performed in a variety of venues from DIY spaces to concert halls including Carnegie Hall, Issue Project Room, Silent Barn, Whitney Museum, Le Poisson Rouge and The Kitchen. In collaboration with Charlie Looker, the band Seaven Teares released their debut album Power Ballads in 2013 on Northern Spy Records. Recent projects include Apollo’s Accidental Answer a chamber opera with the Pat Spadine’s Ashcan Orchestra, the premiere of AACM founder and legendary composer/pianist Muhal Richard Abrams’ Dialogue Social, and The Oversoul Manual by Darius Jones, premiered at Roulette followed by a Carnegie Hall debut and releasing an album on Aum Fidelity in October 2014. She recently premiered Ben Vida’s work Slipping Control for voice and electronics with Tyondai Braxton at the Borderline Festival in Athens, Greece. Amirtha is fortunate to have had the great honor of working with the late composer Robert Ashley since 2011 in That Morning Thing and premiered WWW III (Just the Highlights). Amirtha and the Varispeed ensemble also premiered his final opera CRASH in the 2014 Whitney Biennial with a Spring 2015 performance run at Roulette.