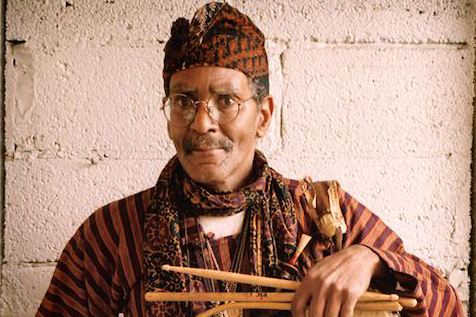 “The One and The Many.” A concert Of and In Multidimensional Drumming. Cooper’s daring improvisations layer melodic variations over immaculately precise, complex rhythmic patterns, as profound spiritual experiences.

Jerome Cooper (December 14, 1946 – May 6, 2015) was an American free jazz musician. Known as a multi-dimensional drummer, Cooper played balafon, chirimia and electronic tonal activator in addition to trap drums. He was born in Chicago, Illinois and died in Brooklyn, New York. Cooper studied with Oliver Coleman and Walter Dyett in the late 1950s and early 1960s, then studied at the American Conservatory and Loop College. In 1968 he worked with Oscar Brown, Jr. and Kalaparusha Maurice McIntyre in the U.S. but moved to Europe before the end of the decade, where he played with Rahsaan Roland Kirk, Steve Lacy, Lou Bennett, the Art Ensemble of Chicago, Alan Silva, Frank Wright, and Noah Howard. After returning to the U.S. in 1971, he joined the Revolutionary Ensemble alongside Leroy Jenkins and Sirone, where he remained for several years and played piano, flute, and bugle in addition to drums. In the 1970s, he played with Sam Rivers, George Adams, Karl Berger, Andrew Hill, and Anthony Braxton. In the 1980s he worked again with McIntyre and with Cecil Taylor. –Bio as of 2019