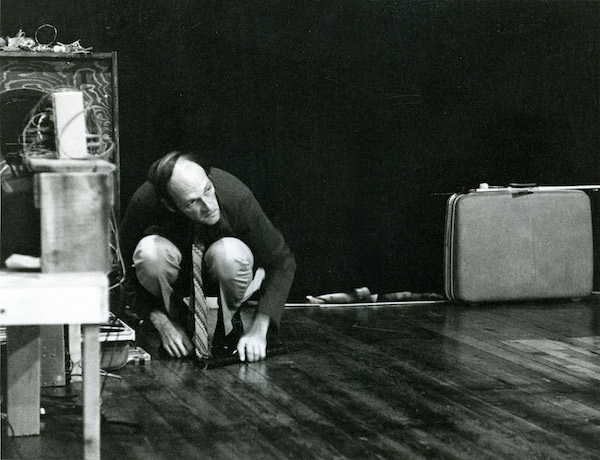 In one of the most legendary performances at the original Roulette loft, Jerry Hunt (1943-93) prowling the stage, performing from his Bitome project, wearing his ubiquitous jacket and tie, with his equipment suitcase that doubled as a performance seat and percussion instrument, button controllers made from bakelight dishes, optical sensors triggering video disks, fetish objects including shakers, sticks, and rattles made by David McManaway, and convincing all in attendance that they were watching a ceremonial magician.

The preserved audio is digitized audio from the original reel-to-reel tapes, somewhat in distress, but worth a listen.

Jerry Hunt was a virtuoso pianist who transitioned into a programmer and chip designer. A one-time Rosicrucian adept he founded his own correspondence course church at the age of 13 and gathered extensive knowledge of mystical systems, particularly those of alchemy, Goëtic theurgy, Tarot, voodoo and Kabbala.  He is known to have focused on occultist Englishman John Dee, best known for transcribing a series of seances held between 1582 and 1589, in which his medium, Edward Kelley, purports to hold conversations with contacted spirits, chiefly the angel Uriel. The centerpiece of the transcriptions is the Enochian tablets, several tables of letters and numbers resembling giant bingo cards.