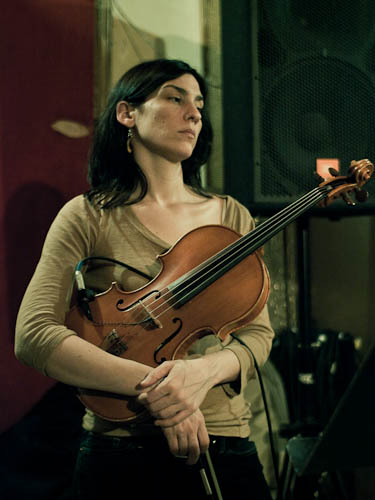 Also performing this evening is Magda Mayas & Tony Buck duo! Berlin based pianist Magda Mayas has developed a vocabulary utilizing both the inside as well as the exterior parts of the piano, using preparations and objects as she explores textural, linear and fast moving sound collage. Tonight Mayas joins forces with one of Australia’s most creative and adventurous exports – percussionist Tony Buck!

An active performer in New York City for the past decade, Jessica Pavone has been leading her own bands; Army of Strangers and The Pavones, has performed in ensembles led by Anthony Braxton, Jason Cady, Jeremiah Cymerman, Matana Roberts, Henry Threadgill, and Matthew Welch, as well as such collective groups as the Mary Halvorson/Jessica Pavone Duo, Normal Love, and The Thirteenth Assembly.

As a composer, Pavone has earned grants and commissions from the Aaron Copland Recording Fund, the American Music Center, The Kitchen, MATA, The Jerome Foundation, and the group, Till By Turning, which recently presented the European premiere of her piece “Quotidian” at Faust’s Klangbad Festival 2009 in Germany. Her discography features more than 30 recordings, including recent releases from the Anthony Braxton 12+1tet, Taylor Ho Bynum & SpiderMonkey Strings and William Parker. Jessica’s music has been released by the Tzadik, Thirsty Ear, and Porter record labels.

Tony Buck is regarded as one of Australia’s most creative and adventurous exports, with vast experience across the globe. He has been involved in a highly diverse array of projects but is probably best known around the world as a member of the trio The Necks. Following studies and early experience in Australia he spent time in Japan, where he formed PERIL with Otomo Yoshihide and Kato Hideki before relocating to Europe in the mid-nineties. Some of the more high profile projects he has been involved with include the band Kletka Red, and touring and recording with, among others, The EX, The Exiles, and Corchestra, and involvement with most of the international improvisation and new music community and festivals. He also creates video works for use with live music performance and has had pieces shown in Tokyo, Belfast, Berlin, New York and Sydney.

Magda Mayas is a pianist living in Berlin. Developing a vocabulary utilizing both the inside as well as the exterior parts of the piano, using preparations and objects, she explores textural, linear and fast moving sound collage. Lately she has also focused on the clavinet, an electric piano from the 60s with strings and metal chimes, where she engages with noise and more visceral sound material, equally extending the instrumental sound palette using extended techniques and devices. Current projects are “Spill”, a duo with drummer Tony Buck, a duo with Anthea Caddy (cello), a duo with Christine Abdelnour Sehnaoui (sax), “Great Waitress”, a trio with Monika Brooks (acc) and Laura Altman (cl) and different collaborations with Andy Moor, Clayton Thomas and Peter Evans. Magda Mayas has performed and toured in Europe, the USA, Australia and Lebanon with many leading figures in improvisation such as John Butcher, Peter Evans, Annette Krebs, Andrea Neumann, Axel DÃ¶rner, Johannes Bauer, Christoph Kurzmann, Thomas Lehn and Tristan Honsinger