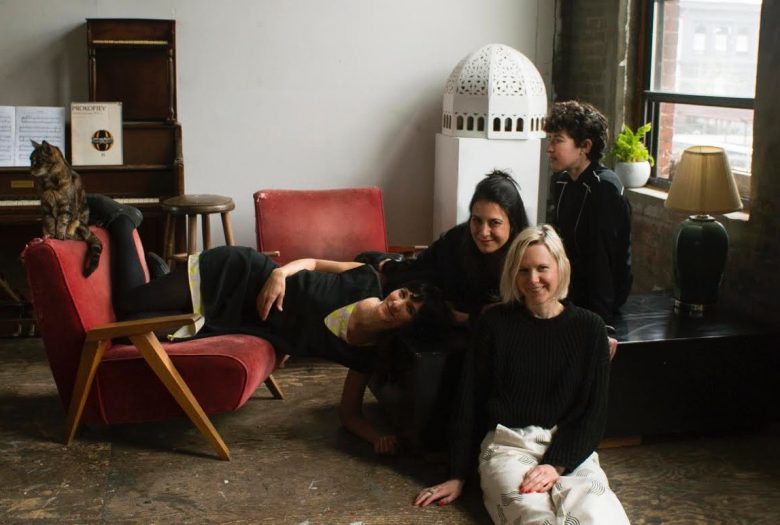 This concert celebrates the first album release from Jessica Pavone’s newest incarnation for string ensemble, which features two violins and two violas. Brick and Mortar, to be released on Birdwatcher Records on October 4th, 2019, is her first body of string ensemble music since pausing to focus on writing for solo viola for the last six years. Her earlier work for string quartet, which substituted a second violin for double bass was documented on her 2009 and 2012 releases from the Tzadik label; Songs of Synastry and Solitude and Hope Dawson is Missing, highlighted melody, narrative, and themes of undeniable truths. Upon completion, Pavone focused primarily on creating a new and unique voice on her instrument with her solo music resulting in three releases for solo viola; Knuckle Under, Silent Spills and In the Action. Pavone returned to composing for string ensembles in the spring of 2017 by forming the J.Pavone String Ensemble as an extension of the sonic discoveries of her solo music.

As both an instrumentalist and composer, Pavone has regularly and thematically explored tactile experience in her compositions and performances. This is most notable in her solo viola music, where she performs indeterminate pieces that stem from years of concentrated long tone practice, her interest in repetition, song form, sympathetic vibration, and the physicality of playing her somewhat larger-than-comfortable instrument. Founded in 2017, The Jessica Pavone String Ensemble combines these modalities as an ensemble she both composes for and performs in as a violist. The group presents original compositions which expand on the themes of her solo work while also integrating a deeper understanding of the effects sound has on the listener. While these discoveries have been primarily instinctual, she plans to further study these principles more formally by gaining a better understanding of Cymatics.

The performance is accompanied by the premiere for Hurtle and Hurtle, a video work directed by artist Neil Cloaca Young. Shot entirely along the Connecticut River and its related rapids, dams, canals, and spillways in Western Massachusetts, the piece meditates on the way the river’s water as it moves at varying speeds on its journey to the ocean, passing all manner of obstacles, both geological and human-made.

As both an instrumentalist and composer, Pavone has regularly and thematically explored tactile experience in her compositions and performances. This is most notable in her solo viola music, where she performs indeterminate pieces that stem from years of concentrated long tone practice, my interest in repetition, song form, sympathetic vibration, and the physicality of playing my somewhat larger-than-comfortable instrument. Founded in 2017, The Jessica Pavone String Ensemble combines these two modalities as an ensemble she both compose for, and performs in as a violist. The group presents original compositions which expand on the themes of her solo work while also integrating a deeper understanding of the effects sound has on the listener. While these discoveries have been primarily instinctual, she plans to further study these principles more formally by gaining a better understanding of Cymatics.

Jessica Pavone is a multi-string instrumentalist and composer residing in Queens, NY.  While her earliest training was primarily in classical music, after graduating from conservatory, she began exploring other avenues for creative musical expression. Pavone has received grants and commissions from The American Music Center, New Music USA, Music at the Anthology (MATA), The Jerome Foundation, The Tri-Centric Foundation, Experiments in Opera, and was a composer in residence at Mise-En_Place in 2018. She has premiered new work in venues in New York City such as Roulette Intermedium, Issue Project Room, Abrons Art Center, and The Kitchen. As an instrumentalist, she has personally worked with and interpreted new music by Aaron Siegel, Elliott Sharp, Glenn Branca, Henry Threadgill, Matana Roberts, Matthew Welch, Tristan Perich, Anthony Braxton, and William Parker. As a composer, she has released over a dozen albums produced by Tzadik, Taiga Records, Thirsty Ear, Relative Pitch, and Skirl Records. In 2011, Pavone was featured in NPR’s “The Mix: 100 Composers Under 40″ and since, The Wire magazine has praised her “ability to transform a naked tonal gesture into something special,” and The New York Times described her music as “distinct and beguiling…its core is steely, and its execution clear.”

Neil ‘Cloaca’ Young is an artist who makes sounds, images, and events. An active improviser and collagist, Young’s output takes many forms as experimental cinema, audio recordings, compositions and performances, utilizing a variety of tools and media such as percussion, electroacoustic synthesis, coding, magnetic tape, and celluloid film. Solo and in collaborations, Young has exhibited and performed at High Zero, ICA Boston, EMPAC, Block Museum of Art, IFFR, Ann Arbor Film Festival, SXSW, CPH:DOX, Anthology, Kunstencentrum Belgie and Instants Chavirés. He co-directed the feature-length portrait film MILFORD GRAVES FULL MANTIS, which has screened all over North America and Europe to critical acclaim, winning the Best International Documentary Award at In-Edit Barcelona and Best Documentary Feature at Oak Cliff as well as the Independent Vision Jury Prize at the Sarasota Film Festival. He has been awarded the Massachusetts Cultural Council Fellowship for his work in filmmaking and has participated in residencies at Signal Culture in upstate NY and Deplayer in The Netherlands. He lives and works in Western Massachusetts, North America.

A proponent of new music, Erica Dicker is committed to creative collaboration with living composers and innovation in both the classical concert hall and nontraditional contexts.  Erica is a founding member of the contemporary chamber music collective Till By Turning, an ensemble devoted to reinforcing the modern canon and linking educational programs to their repertoire. As part of the New York-based horn trio, Kylwyria, Erica and her colleagues, Julia Den Boer(piano)  and John Gattis (horn), work to generate interest in and develop adventurous chamber music repertoire for their unique instrumentation through dynamic programming and commissioning. Erica is also violinist in Katherine Young’s Pretty Monsters, as well as Vaster Than Empires, an electro-acoustic collaboration with composer and sound artist Paul Schuette and percussionist Allen Otte. She has premiered works by many composers including solo works written for her by Olivia Block, Turkar Gasimzada, Ryan Ingebritsen and Katherine Young. Erica also writes and performs her own music, exploring the idiomatic modalities and textures of her instrument. Taking Auspices, her debut solo album, is released by Tubapede Records as a digital download and limited edition vinyl LP.

Abby Swidler is a performer, composer, and educator.  A violinist and vocalist, Abby is a passionate collaborator, frequently performing with ruby, a song collaboration with Kim Mayo; the NYC chamber orchestra, Shattered Glass; Italian film-score band, Tredici Bacci; and The Jessica Pavone String Ensemble, among other projects across genre lines.  As a composer and performer, Abby has collaborated with dance, film, theater, and performing ensembles; working with artists like Carla Kihlstedt, Mirah, Kishi Bashi, Jherek Bischoff, Anthony Coleman, Bent Knee, The California Guitar Trio, Shizuka Viola Duo, Dance Visions INC., and Giselle Ty.   She has played on over 30 studio albums.  Abby received a B.M. in Violin Performance from Eastman School of Music and an M.M. in Contemporary Improvisation from The New England Conservatory.  Originally from Missoula, MT, they currently live in Brooklyn, NY.

If Brooklyn’s music circles draw a Venn diagram, Angela Morris thrives in the loop between avant-jazz and pop. Originally from Toronto, the NYC-based composer, saxophonist, and multi-instrumentalist has performed throughout North America and Europe from arenas to DIY basement shows and everything between.  The Webber/Morris Big Band, her 18-piece jazz big band, performs original compositions by Morris and co-leader Anna Webber. The New York Times praised their “ambitious original compositions” and “jagged-edged band that has begun to turn musicians’ heads.” The ensemble will release their debut recording in 2020 on the Greenleaf Music label. Morris is a member of Motel and TMT Trio, two collaborative trios that respectively released albums in 2017: like you always do, I always did too by Motel (Prom Night Records), and Star Balladby TMT Trio.  A 2019 Composer Fellow at Gabriela Lena Frank Creative Academy of Music, Morris has also been artist-in-residence at Willapa Bay AiR, the Atlantic Center for the Arts, and the Banff Centre. She holds an MA in Music Composition from the Aaron Copland School of Music at CUNY Queens College in New York and BA in Jazz Studies from Humber College in Toronto. She is an alumna of the BMI Jazz Composer’s Workshop lead by Jim McNeely and studied composition with the Grammy-nominated jazz composer Darcy James Argue.