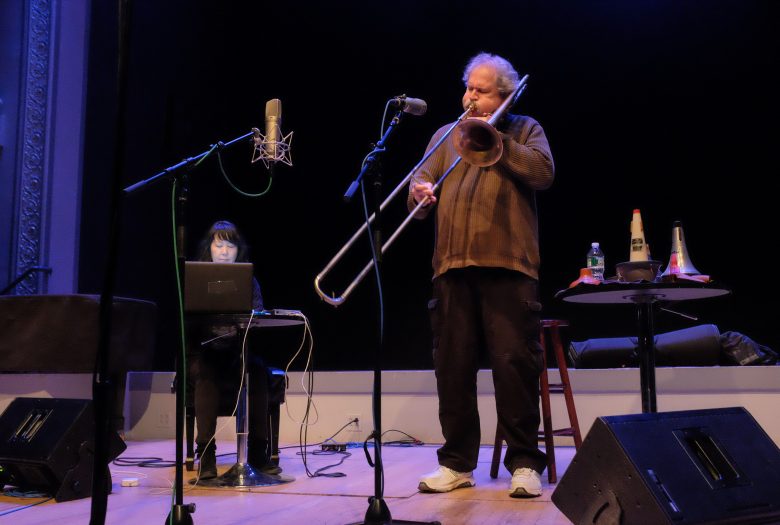 Orchestration—Combining these instruments and instrumentalists in various states of nature and subversiveness.

Roulette Intermedium founder and Artistic Director Jim Staley was most recently a recipient of the American Composer Forum 2018 Champion of New Music Award. In addition to his work at Roulette, Staley is an accomplished improvising musician and occupies a unique position among trombonists, crossing genres freely between post-modern classical music and avant-garde jazz. He has released numerous albums, played on many records, and is a member of the Tone Road Ramblers, a new music ensemble formed in 1981. — Bio as of 2019

After moving to New York from her native Tokyo in 1977, Ikue Mori began playing drums in seminal No Wave band DNA with fellow noise pioneers Arto Lindsay and Tim Wright. In the mid 1980s, Ikue began to employ drum machines in the context of improvised music. While limited to the standard technology provided by the drum machine, she nonetheless forged her own signature style. Throughout in 1990s she collaborated with numerous improvisors throughout the United States, Europe, and Asia, while continuing to produce and record her own music. After becoming involved with the city’s flourishing improvisational scene via John Zorn, she began experimenting with drum machines, and in recent years utilizes the laptop as her primary instrument. Ikue has lead workshops and lectures at University of Gothenburg, Dartmouth College, New England Conservatory, Mills College, Stanford University, and The School of the Art Institute of Chicago. — Bio as of 2019

The guitarist, critic, publisher, and activist Davey Williams (1952–April 5, 2019) is an eternal inductee into the Roulette hall of fame. Born in York, Alabama, Davey Williams is generally acknowledged as one of the founders and preeminent exponents of American free-improvised guitar playing. In his late teens and early twenties he worked in the blues band of Johnny Shines, and in the soul band and revue Salt and Pepper.  By the mid-1970s he had begun involvement in new jazz, avant-garde composition, surrealism and free improvisation. In 1974 he and LaDonna Smith formed the improvising duo (and record label) Trans Museq, during which time he was also active in Rev. Fred Lane & the Debonairs and the Raudelunas Pataphysical Revue.

From the mid-1980s, he was part of the New York downtown scene, playing in the band Curlew with George Cartwright and Tom Cora, and in many other settings. He has worked with many contemporaries in new composition and free improvisation including Anne LeBaron, John Zorn, Jim Staley, Ikue Mori, Col. Bruce Hampton, Andrew Dewar, and in the London-based trio Say What! He has appeared on many recordings and has performed internationally in a wide variety of solo, ensemble and multi-media events. — Bio as of 2019