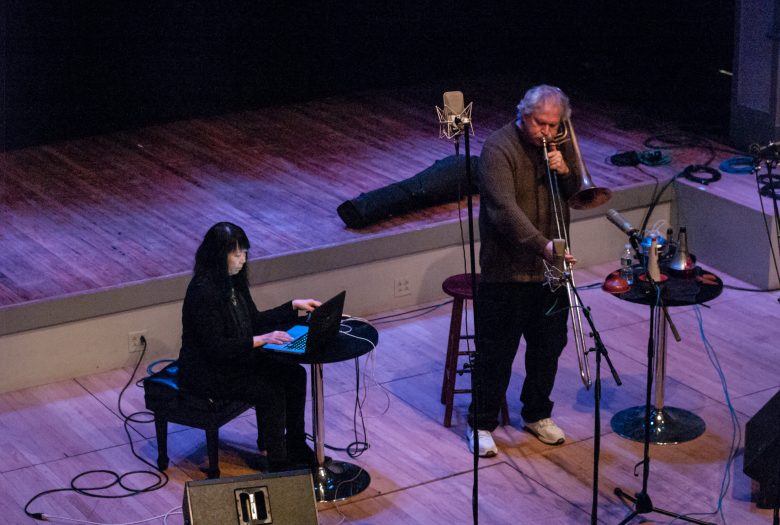 Trombonist, composer, and founder of Roulette Jim Staley has been shaking up the downtown experimental music scene for over 30 years. Working primarily with improvisation, crossing genres freely between post-modern classical music and avant-garde jazz, Staley has collaborated for many years with other highly experienced improvisers, both dancers and musicians. Tonight Jim will be joined by special guests.

Ikue Mori moved from her native city of Tokyo to New York in 1977. She started playing drums and soon formed the seminal NO WAVE band DNA, with fellow noise pioneers Arto Lindsay and Tim Wright. DNA enjoyed legendary cult status, while creating a new brand of radical rhythms and dissonant sounds; forever altering the face of rock music. In the mid 80’s Ikue started in employ drum machines in the unlikely context of improvised music. While limited to the standard technology provided by the drum machine, she has never the less forged her own highly sensitive signature style. Through out in 90’s She has subsequently collaborated with numerous improvisors throughout the US, Europe, and Asia, while continuing to produce and record her own music. 1998, She was invited to perform with Ensemble Modern as the soloist along with Zeena Parkins, and composer Fred Frith, also “One hundred Aspects of the Moon” commissioned by Roulette/Mary Flagler Cary Charitable Trust. Ikue won the Distinctive Award for Prix Ars Electronics Digital Music category in 99. In 2000 Ikue started using the laptop computer to expand on her already signature sound, thus broadening her scope of musical expression. 2000 commissioned by the KITCHEN ensemble, wrote and premired the piece “Aphorism” also awarded Civitella Ranieri Foundation Fellowship. 2003 commissioned by RELACHE Ensemble to write a piece for film In the Street and premired in Philadelphia. Started working with visual played by the music since 2004. In 2005 Awarded Alphert/Ucross Residency. Recived the grant from Foundation for Contemporary Arts in 2006. Tate Modern commissioned the live sound track for Maya Deren’s silent films and premired in 2007.
In 2008 Celebrated 30th music year, presented 5 on-going projects at Japan Society in NYC.
Current working groups include MEPHISTA with Sylvie Courvoisier and Susie Ibarra, projects with Kim Gordon, duo project PHANTOM ORCHARD with Zeena Parkins, various projects with John Zorn.