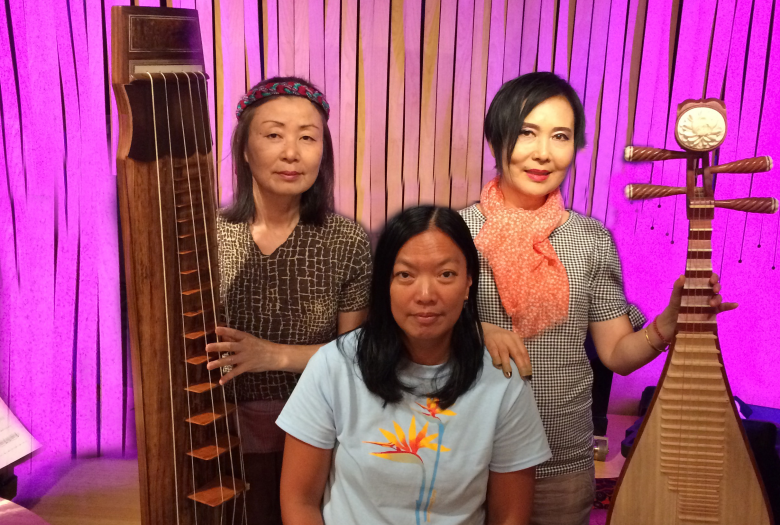 Together, however, the three women create Asian Sound Revolution. With multiple instruments as well as stylized vocal techniques coming from ancient practices, Asian Sound Revolution will perform all original music, including solos, duos and the World Premiere of three trip pieces: Meditation, Souk al Henna, and JIN Opera. Tonight they will engage the audience through their skilled improvisation and create new traditional sounds through electronic techniques with their small, yet impressively powerful, ensemble.

Jin Hi Kim creates new workds with her dual identity between ancient Korean roots and contemporary American society. Kim began her musical life through studying the 4th century indigenous Korean komungo (geomungo). She is recognized as a pioneer for introducing her traditionally Korean instrument into the American contemporary music scene and is also known for her extensive solo performances on the world’s only electric komungo. These performances represent an evolution of the instrument into the twenty-first century. Peter Waltrous of the New York Times said, “Virtuoso, Jin HI Kim promises thoughtful, shimmering East-West amalgams in combinations that are both new and unlikely to be repeated.”

Few artists have done more to both honor and reinvent the 2000-year history of the pipa than renowned soloist, vocalist and composer Min Xiao-Fen. An in-demand interpreter of traditional music before relocating to the United States, Min has forged a new path for her instrument in modern jazz, free improvisation, and contemporary classical music. The Village Voice lauded her as an artist who “has taken her ancient Chinese string instrument into the future,” and the New York Times said that she’s “a pipa player like no other.” Min has collaborated with such inventive luminaries as Wadada Leo Smith, Derek Bailey, Randy Weston, John Zorn, Christian Marclay and Björk. Min has been a featured soloist with leading symphony orchestras and recently premiered her score for the long-lost 1934 Chinese silent film The Goddess. She is the founder of Blue Pipa Inc. and currently lives in New York.

Susie Ibarra is a Filipina-American composer, percussionist, and sound artist. Her sound has been described as “a sound like no other’s, incorporating the unique percussion and musical approach of her Filipino heritage with her flowing jazz drumset style” (Modern Drummer Magazine) and her compositions are sometimes described as “calling up the movements of the human body; elsewhere it’s a landscape vanishing in the last light, or the path a waterway might trace” (New York Times). Ibarra is a 2019 United States Artist Fellow in Music, a Senior TED Fellow, and a 2018 Asian Cultural Council Fellow in support of her sound research of An Acoustic Story on Climate Change: Himalayan Glacier Soundscapes. Susie Ibarra is a Yamaha, Vic Firth, and Paiste Drum Artist.