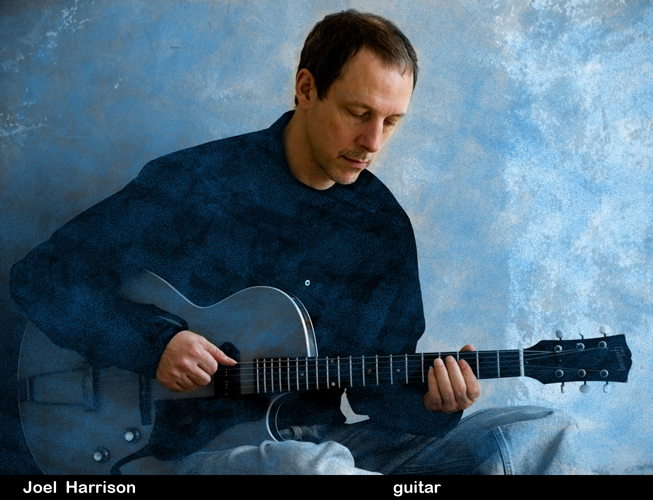 Featuring Harrison’s 2011 septet release Search, as well as a  new work entitled “Train Dreams”, this evening’s music highlights Harrison’s ongoing interest in long form composition that combines substantial notation as well as improvisation. He is joined by two special guests, Gregoire Maret (harmonica) and Paul Hanson (electric bassoon). Hanson was a longtime band member in the 90’s in the Bay Area. On his unique instrument, he is considered the greatest improviser in the world, combining a gift for melody, astounding jazz/rock/classical technique, and electronics into a uniquely powerful package. It is his first East Coast appearance in many years. Gregoire Maret’s harmonica playing is intensely riveting, as demonstrated on his work with Herbie Hancock, Pat Metheny and others. Other members of the ensemble are Christian Howes (vln), Dana Leong (cello), Jacob Sacks (piano), Stephan Crump (bass), and Rudy Royston (drums).

Guitarist, composer, arranger, vocalist, songwriter – Joel Harrison deftly juggles all of these roles while venturing across stylistic divides. His expansive sound fits equally well in jazz clubs and concert halls – and the occasional dive bar across town. Harrison sees no reason to sort his music into jazz, classical, or any such divisions. “Ultimately you’re just trying to arrive at great music,” he says. “Sometimes the best methodology is to leave people to their own devices and sometimes it’s best to write everything down.”Harrison’s success can be seen in the accolades he has received: he was named a Guggenheim Fellow in 2010, is a two-time winner of the Jazz Composer’s Alliance Composition Competition, and has received support from Chamber Music America and, Meet the Composer, the Flagler Cary Trust, NYSCA, and the Jerome Foundation.  He has released 14 cds since 1995 as a leader.

Roulette’s presentation of Joel Harrison’s work is supported by Presenting Jazz, a Chamber Music America program funded through the generosity of the Doris Duke Charitable Foundation.