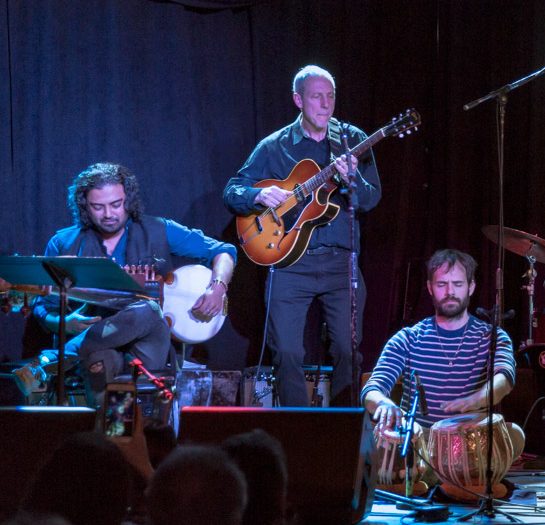 Inspired by South Indian percussion and Indian ragas, guitarist-composer Joel Harrison began writing music for Still Point: Turning World nearly a decade ago—he had just met the virtuoso Anupam Shobhakar and their collaborative process fed Harrison new ideas, determined to find obscure connections between the jazz musician’s and Indian musician’s approaches to improvising. In response, Harrison delved into his love of percussion—the tip tap of mallets, the thunder of timpani the slap of sticks on skins—and aimed to develop a globalized approach to composition by highlighting different components of an ensemble.

“For many years, I have held up an ideal”, explains Harrison, “…to bring under one roof those sounds I most love. This often involves working with seemingly disparate systems of music. All music exists contemporaneously, and each new piece brings us a code to crack. In this case, the code is: how to balance extensive notation and improv; those who read [notation] and those who don’t; a drone instrument (that cannot play harmony) with western harmony; music that specifically grooves and music that doesn’t.”

Washington D.C. native Joel Harrison is a guitarist, composer, arranger, vocalist, and songwriter. Named a Guggenheim Fellow in 2010, he has released 20 albums on seven record labels since 1994. Harrison has spent his career traversing jazz, classical, rock, country, W. African, Indian, and classical music. He is a resident of Brooklyn NY and founder of the Alternative Guitar Summit, a yearly gathering of some of the most creative guitarists on earth.

Talujon Quartet has been mesmerizing audiences since for well over two decades, committing itself to the growth of contemporary percussion music through diverse performance, commissioning, educational, and outreach activities. Highlights of Talujon’s recent engagements include appearances at the Brooklyn Academy of Music’s Next Wave Festival, Bang on a Can Marathon, and Carnegie Hall.

Anupam Shobhakar, is an Indian musician, composer, instrumentalist, record producer, and classically trained sarodist currently living in Brooklyn, New York. He has released three World Fusion albums, and one classical Indian music album. He has performed live around the world at various venues and for charitable causes.

Shifting Foundation grantee Dan Weiss has been hailed as one of the top five jazz drummers in The New York Times, and his large ensemble recording “Fourteen” made the top ten list of their best recordings of 2014. Weiss’s innovative drumming and forward thinking compositions have been pushing musical limits for years.

Memphis-bred, Grammy-nominated, Echo Award-winning bassist/composer Stephan Crump is an active bandleader with twelve critically-acclaimed album releases in addition to numerous film scoring contributions. Known for transforming his instrument into a speaking entity of magnetic pull, his focus on creative instrumental music has led to collaborations with many of the leading lights of his generation.

SELVAGANESH represents the new breed of percussionist emerging from India. They are young, cosmopolitan and adventurous. The son of T H Vikku Vinayakram, Selvaganesh emerges also from a disciplic tradition. Now in his twenties, he has already gained renowned respect among leading musicians of the Carnatic tradition, and was a member of John McLaughlin’s “Remember Shakti.”