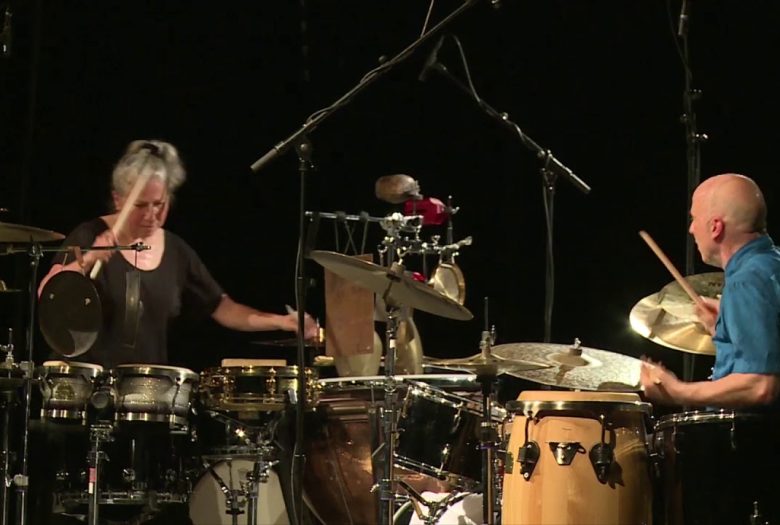 Rhythmlab is an ongoing experiment that explores the processes and dialogues of percussion-based music, by “letting sounds be sounds”. Percussion-based for us (Joey & Robyn) is rhythm centered, and also sonic centered in the sense that the music is guided by the sounds of the actual
material (in this case giant wooden bars). This run features two masters of sound and texture: trombone maestro Jim Staley laptop wizard Ikue Mori.

Joey Baron was born 1955 in Richmond ,Va. He started drumming at age 9, performing profesionally the following year. His early musical education included private drum lessons as well as the wide genre radio programing of the 1960s. After finishing high school early through a special accelerated program, Mr. Baron spent time in Boston attending the Berklee School of Music.He settled in Los Angeles,California in 1975 to realize a dream of playing with the great jazz musician Carmen McRae,consequently becoming a much sought after singer’s drummer. Since moving to New York City in 1983, Mr. Baron has continued to expand his scope and develope his musical ideas through collaborations with various artists including Red Rodney, Bill Frisell, Tim Berne, Ron Carter, and John Zorn ,with whom the collaboration continues to the present.
Current projects include solo concert tours, duo concerts with Lee Konitz, Bill Frisell, his own band, “Killer Joey”,The John Abercrombie Quartet, and the Schulkowsky,Studer,Baron drum trio.

Robyn Schulkowsky was born in Eureka, South Dakota and studied music at the University of Iowa and the music conservatory in Cologne, Germany. She had a brief stint as head of the percussion-department at the University of New Mexico, where she performed with the New Nexico Symphony, the Orchestra of Santa Fe, and the New Mexico jazz workshop. After relocation to Germany in the early 80’s she began working with Karlheinz Stockhausen and Mauricio Kagel, John Cage and Iannis Xenakis, presenting their works in tours that included the former Soviet Union, Korea, China, and major European music festivals. Since the late 80’s she has collaborated with Derek Bailey, Nils Petter Molvaer, Kim Kashkashian, Christian Wolff, Sasha Waltz, and the Ghanaien drummer and composer Ghanaba, who she met during an extended stay in Ghana in 1997. Her current projects include the trio with Joey Baron and Fredy Studer (her new work ARMADILLO was premiered in Italy in June), and music theater piece that will be premiered in Germany in February, 2008.