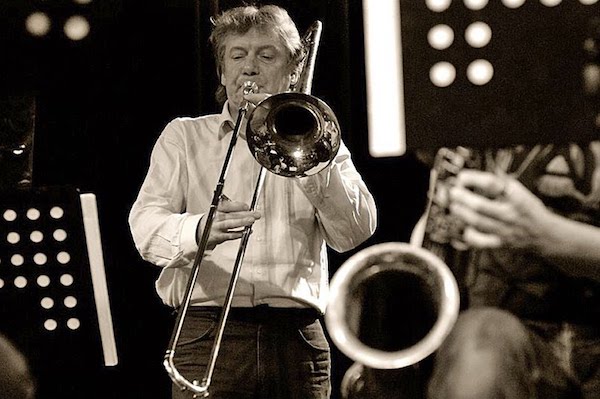 A rare opportunity to hear two extraordinary improvisors from the former East Berlin. Bauer on trombone, Diesner on saxophones.

Johannes Bauer (22 July 1954 – 6 May 2016) was born in the city of Halle on the Saale River, the area which American G.I.’s once referred to as “a dally on the Saale.” He studied music in Berlin and, beginning in the late ’70s, was a freelance improvising musician as well as the leader of several workshop bands in which he presents his own special compositions created for ensembles of like-minded players. Some of the groups he performed with regularly during the period of the divided Germany included the Manfred Schulze Bläserquintett, with which he recorded several different and excellent projects, and the Ulrich Gumpert Workshop. Bauer also was a regular member of the rowdy band Slawterhaus, featuring violinist Jon Rose, and had a long-running relationship with the bearded Belgian pianist Fred Van Hove. When large bands are assembled on the European continent, the phone book inevitably is opened to the letter “B” when it is time to put together the trombone section. Alexander von Schlippenbach’s Globe Unity Orchestra, British bassist Barry Guy’s New Orchestra, the Tony Oxley Orchestra , the Peter Brötzmann März Combo, and free jazz giant Cecil Taylor’s European Orchestra are some of the large groups that have featured this Bauer, and sometimes both of them. On the other hand, North American audiences are more likely to have seen Johannes Bauer in the much smaller setting of a duo, since he performed in many venues across North America in the late ’90s in a duo with his longtime partner Fred Van Hove; inspiring some great review comments such as, “this is not the typical kind of smooth jazz audiences are used to in the Tampa Bay area.” Achtung! –Bio as of 2019

Dietmar Diesner was born in 1955 in Elsterwerda (GDR). He received his first musical training at the Cottbus Conservatory in 1966 and went on to study at the “Carl Maria von Weber” College of Music in Dresden from which he graduated in 1985. He had already been granted an official license to work as a professional musician in 1979 and from that time forward he has earned his living as a freelance musician, first in Berlin and abroad.
He is now based in Dresden. Dietmar Diesner works actively to develop new performance techniques for the saxophone. He is one of the few players who have mastered circular breathing, a technique which enables a performer to create continuous and uninterrupted sound structures and maintain them over a long period of time.

Dietmar Diesner is a practitioner of so-called “real-time composition and performance”, an established form of improvised music which combines the spontaneous-intuitive and compositional aspects of one¹s individual style with spatial and other aspects present at the moment of performance. The musician moves beyond his normal role of (mere) interpreting or improvisation to organize the dramatic-scenic course of the moment with which he is confronted, using aspects such as the room, its echo, other people and their reactions, as well as the relative quiet or noise. –Bio as of 2019