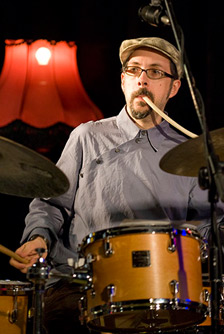 “John is one of the most brilliant musicians I’ve had the privilege of working with.” Meredith Monk

“…Hollenbeck is taking the big band into the future. “ Chris Barton LA TIMES

Celebrating the Sunnyside Records release of SONGS I LIKE ALOT, featuring Kate McGarry and Theo Bleckmann and John’s arrangements of songs by Jimmy Webb, Imogen Heap, Ornette Coleman and others. “John Hollenbeck’s 18-piece Large Ensemble can explode with rhythmic drive and technical dazzle, or it can evoke serene calm, tone poetry and even prayer. It’s a big band for a new eclectic world, building on the legacy of seminal big-band composer Bob Brookmeyer and other role models. Hollenbeck holds it together with intricate drumming, compositional acumen and searing wit as he marshals the resources of top jazz improvisers.”   David Adler (Timeout)

Genre-crossing composer/percussionist John Hollenbeck, renowned in both the jazz and new-music worlds, has gained widespread recognition as the driving force behind the unclassifiable Claudia Quintet and the ambitious John Hollenbeck Large Ensemble, groups with roots in jazz, world music, and contemporary composition. His Large Ensemble’s albums “A Blessing” (Omnitone) and “eternal interlude” (Sunnyside Records) both received Grammy nominations, and in 2007, John was awarded the prestigious Guggenheim Fellowship and in the 2012 he was awarded a Doris Duke Performing Artists Award.  He is well known in new-music circles for his longtime collaboration with Meredith Monk, and has been commissioned recently by Bang on a Can All-Stars, Gotham Wind Symphony, Ethos Percussion Group, the Painted Bride Art Center (Philadelphia), the Orchestre National de Jazz funded by the Chamber Music America French-American Jazz Exchange; and the hr-BigBand of Frankfurt, Germany.