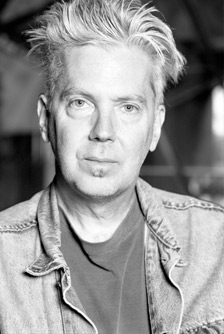 John King, composer, guitarist and violist, has received commissions from the Kronos Quartet, Red {an orchestra}, ETHEL, the Albany Symphony/”Dogs of Desire”, Bang On A Can All-Stars, Mannheim Ballet, New York City Ballet/Diamond Project, Stuttgart Ballet, Ballets de Monte Carlo, as well as the Merce Cunningham Dance Co. His string quartets have also been performed by the Eclipse Quartet (LA) and the Mondriaan Quartet (Amsterdam). His quartet Crucible has premiered many of his compositions at The Stone (June 2007) and The Kitchen (April 2009).

Join us after the concert for a Q & A with John King!

(climax in) The Deserts of Love

For large ensemble and soprano, featuring Melissa Fogarty. A poetic reduction of the Arthur Rimbaud text.

JOHN KING, composer, guitarist and violist, has had his string quartets performed by the Kronos, Ethel, Eclipse and Mondriaan quartets, as well as his own group Crucible. Since 1985 he has been a composer and musician with the Merce Cunningham Dance Company, and in 2011 he was commissioned by MCDC to compose Astral Epitaphs for brass sextet, choir and live electronics for their final performances at the Park Avenue Armory

He has written 3 operas: herzstück/heartpiece, based on the text of Heiner Müller; la belle captive based on texts by Alain Robbe-Grillet, and  his most recent opera, Dice Thrown, based on a Stéphane Mallarmé poem, which was premiered in LA in April 2010. King has also written 3 short pieces for the Brooklyn Youth Chorus using Ancient Greek texts, used within the composition Astral Epitaphs.

He has 3 recent CD releases of music for string quartet; 10 Mysteries and AllSteel (Tzadik); and Ethel (Cantaloupe). And he was also the recipient of the 2009 Alpert Award in the Arts for Music.