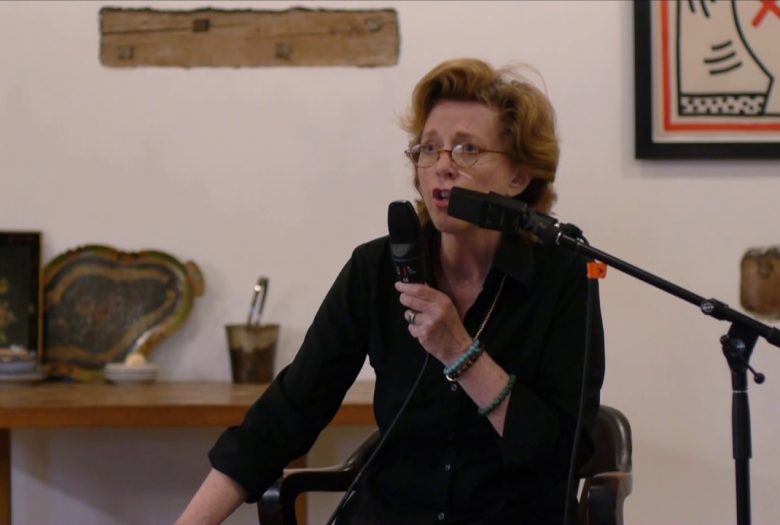 Heyward will be performing with elements of her large scale triptych “Nothing Random Access Memory” which includes the completed interactive version of “Miracles in Reverse” as well as work-in-progress versions of part two, “Points of View,” a series of ‘faux’ windows (including the artist’s own bedroom window, which looks out onto Cortland Alley, an often used film location featuring a continuous stream of Hollywood simulated violence) and part three “The Gabriel Frequency,” featuring the Archangel Gabriel the middleman of monotheism and the source of much of the conflicting revelations that to this day is at the core of the various infidel cleansings. All parts of the triptych deal with trauma and memory — some from a local/personal perspective others from a global/mythological perspective.

“Miracles in Reverse” was directed and designed by Heyward with music by Heyward and Greg Smith with Michael Kott, Dwight Loop and Greg Bowman; additional sound design by Don Christensen.The lingo porgamming is by Aishwarya Saigal.

“Miracles in Reverse” is an interactive DVD-ROM an audio visual album”¦ a hybrid of a family album and a music album. “Miracles” is structurally and conceptually composed of loops ( music and visuals ). These designs explore the rhythms of the vicious cycles of associative and obsessive thoughts as well as other mantras. Within the programming design there is room for interpretation in the sense that the performer can literally play her ‘life movies’ like a musical instrument which evokes sounds and pictures. The narrative is centered around trauma and memory consistently traveling between the personal and the global with a kind of slippery Jungian spirit dipping into the collective unconscious, quantum theory, animism, neuroarcheology, and history reflexively. How we survive the memories, how we distort the memories, and how we store and access the memories gets equal time in this life’s reflections.

Julia Heyward: Heyward’s work centers around the orchestration of music, image, and language in the forms of multimedia, performance and new media. Heyward’s “No Local Stops” won a ‘BESSIE’ for outstanding performance of the year for 1984 presented by DTW New York Dance and Theater Award. Heyward has written, produced and performed in all of her multimedia works notably two other large scale multimedia performances entitled respectively “Mood Music” premiered May 1988 and “Miracles in Reverse” premiering in Potsdam, Germany in 1996. Heyward has received grants from the John Simon Guggenheim Foundation, the Rockefeller Foundation’s Multi-Arts and Film/Video/Multimedia Foundations, The Greenwall Foundation, NYSCA and NYFA in support of this work. For the past six years Heyward has been totally submerged in digital and interactive technologies. The DVD-ROM version of “Miracles in Reverse” has been shown at The Daejeon Municipal Museum in Korea (curated by Lawrence Rinder), Art Interactive in Boston (curated by Kathy Brew), the Wood Street Galleries in Pittsburgh, and Centro de la Imagen in Mexico City as an installation. Heyward’s commercial work includes directing for pop television including many music videos as well as shorts for MTV and M2.