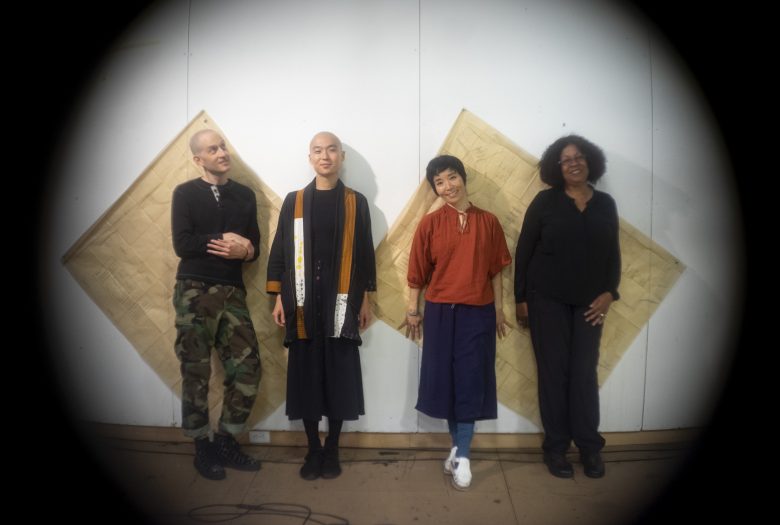 The piece has been co-created through an intensely collaborative process over the span of three years by Eddy Kwon, Senga Nengudi, and Degenerate Art Ensemble’s Haruko Crow Nishimura and Joshua Kohl. Intuitive play, loving conversations, and a deep sense of trust allowed for the generative convergence of diverse artistic practices, cultural backgrounds, gender experiences, age, ability, and geographies.

In their second Roulette Van Lier Fellowship performance, Eddy Kwon presents this in-progress collaborative work to be premiered in its entirety in 2022.

From the group’s statement: “Our work is intensely collaborative, rooted in the deepest respect and love we hold for one another. Through an intentional, transformational process, we build a world within which we can be free. Our bodies live in fear, in the shadows of beginning-less violence, in joy and in care. Through ritual and embodiment, we find openings for healing and growth and invite others to arrive. We are trying to tell a story we never want to end.”

Senga Nengudi’s (she/her) media-spanning oeuvre draws on a range of influences including free jazz and spoken word, Yoruba mythology, Japanese art and theater, Brazilian Constructivism, and African ritual. Characterized by experimentation with process, material, and form, Nengudi’s work challenges and reimagines the traditional narratives of Post-Minimalism and Conceptual Art, while reframing the broader histories of both feminism and the Black Power Movement. Nengudi has been the subject of solo exhibitions at the Fruitmarket Gallery, Edinburgh (2019); Henry Moore Institute (2018); the Baltimore Museum of Art (2018); Art + Practice, Los Angeles (2018); the Institute of Contemporary Art, Miami (2017); and the Contemporary Arts Center, New Orleans (2017). She has also been featured in significant group exhibitions, including Soul of a Nation (2017); Viva Arte Viva, the 57th Venice Biennale (2017); We Wanted A Revolution: Black Radical Women, 1965–85 (2017); Radical Presence: Black Performance in Contemporary Art (2012); Now Dig This! Art and Black Los Angeles 1960–1980(2011); WACK! Art and the Feminist Revolution (2007); and the 54th Carnegie International (2007). www.sengasenga.com

Degenerate Art Ensemble (Haruko Crow Nishimura, she/her & Joshua Kohl, he/him) has shown their work throughout the US and Europe known for their large scale dance and theater projects, concerts, site-transforming spectacles and ongoing public experimentation. Recent highlights of the group’s work include a major exhibition at the Frye Art Museum in 2011, was commissioned by director Robert Wilson to interpret his work Einstein on the Beach in 2012 and collaborated with the Kronos Quartet in 2013. Also in 2012 Degenerate Art Ensemble was commissioned by the city of Seattle to create a massive site specific work Underbelly in collaboration with Olson Kundig Architects to celebrate the 50th anniversary of the Seattle World’s Fair. The group’s 2015 work Predator Songstress premiered at the Yerba Buena Center in San Francisco in 2015. In of 2016 DAE teamed up with Czech rock legends Uz Jsme Doma for an epic orchestral work inspired by the group’s music at the Archa Theatre in Prague with the South Bohemian Philharmonic Orchestra. DAE’s newest work Skeleton Flower was first seen as a work in progress at the Spotlight USA Festival in Plovdiv, Bulgaria, had its world premiere in Seattle in 2019, will be performed at the International Festival of Contemporary Dance in Mexico City in August of 2021 and will have its New York premiere in 2021. www.degenerateartensemble.com

Eddy Kwon is a Roulette 2021 Van Lier Fellow, made possible with funds provided by the Edward and Sally Van Lier Fund of the New York Community Trust. This performance is presented through Roulette’s GENERATE program, providing over 30 artists each year with in-depth creative and technical support.

The project is supported by The Andrew W. Mellon Foundation through a residency at the Colorado Springs Fine Arts Center at Colorado College.

The work will have its full premiere in early 2022 at Colorado College.