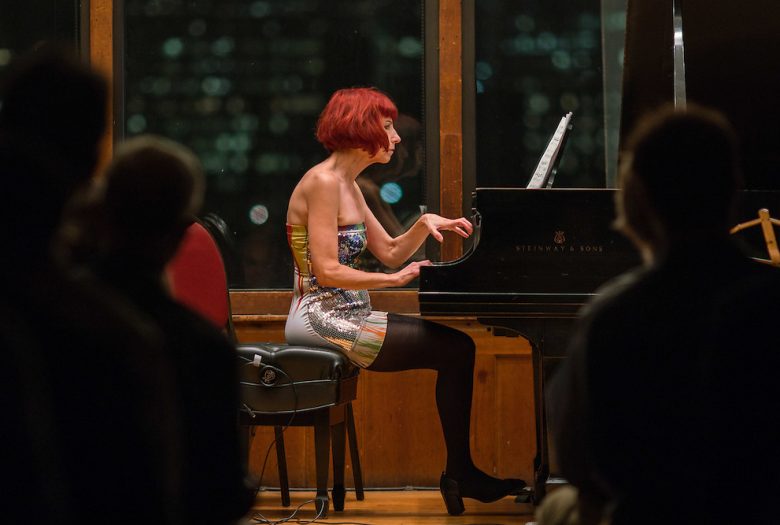 “What Ms. Supové is really exploding is the piano recital as we have known it, a mission more radical and arguably more needed.” Anthony Tommasini, NY Times

“This was classical music played like the best rock’n’roll. It was passionate, earnest, loud and more complex than the gatekeepers of high culture would like to think. Brava.” Ben Sisario, NY Press

Pianist Kathleen Supové is not only one of the most acclaimed interpreters of contemporary music in this country, but also an artist who is continually evolving an answer to the question of what music gets presented and how it gets presented. She has commissioned, premiered and performed countless works by emerging and important composers and, in always being at the forefront of seeking out new voices, she has established herself as an integral part of recent music history.

Ms. Supové presents concerts under the name of The Exploding Piano. In recent seasons, she has developed The Exploding Piano into a multimedia experience by using electronics, theatrical elements, vocal rants, performance art, staging, and collaboration with artists from other disciplines. Much of this has been developed during her years in residency at The Flea Theater in Tribeca. The Exploding Piano concerts have taken place these past two seasons in universities, conservatories, and performance spaces throughout the US. This past season, she was a featured artist at the Ussachevsky Memorial Festival in Claremont, CA, as well as the NIME 2007 Festival in NYC. During this upcoming season, she will be a guest artist at the Other Minds Festival in San Francisco and the Pianists At The Edge series at University of Pittsburgh. Supové has also appeared with The Lincoln Center Festival, The Philip Glass Ensemble, Bang On a Can Marathon, Music at the Anthology, Composers’ Collaborative, Inc., and at many other venues, ranging from concert halls such as Carnegie to theatrical spaces such as The Kitchen to clubs such as The Knitting Factory, The Stone, and The Cutting Room.

She has already commissioned a large body of works for piano and electronics, as well as works for the Yamaha Disklavier. In 2001, Ms. Supové became a Yamaha Artist. Her most recent CD, INFUSION, appears on the Koch International Classics label. Other recordings can be found on the Tzadik, CRI, New World, Innova, Neuma, Bridge, Centaur, OO, and XI labels. For more info, visit supove.com or myspace.com/supove.