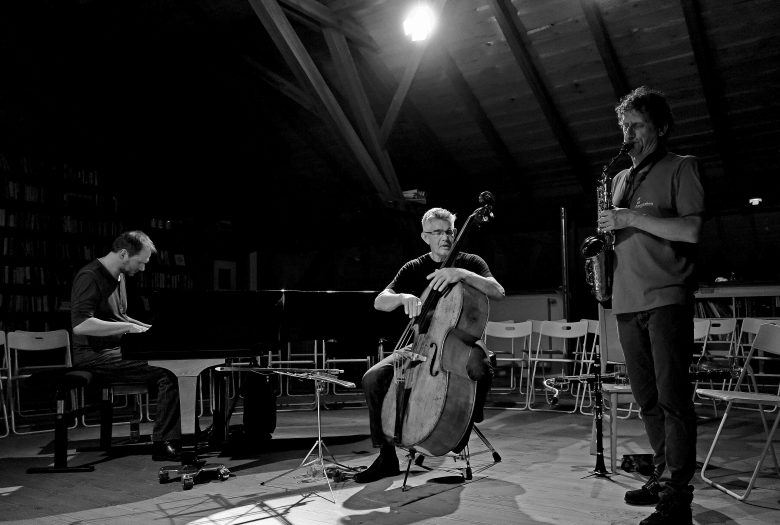 “The three spontaneously weave compact pieces full of intricate, multi-threaded interaction. (“¦) The group can construct spare, riveting music from the quiet hush of bristling detailed textures. They can also shape improvisations that build to a full-bore rush of heated intensity. But what stands out most is how they do this with such a highly-developed group sound”¦” Michael Rosenstein, Signal to Noise magazine. This Trio of Achim Kaufmann (piano), Frank Gratkowski (clarinets, alto saxophone), and Wilbert De Joode (bass) present improvised chamber music at its finest in this rare US appearance!

“…the power of their collective history is highlighted during their third album’s opening number, where de Joode’s athletic and falsetto bass is matched with unerring timbral precision by the blunted subtone of Gratkowski’s clarinet. The two musicians jive around each other, their counterpoint gelling into a cracked continuum, which Kaufmann bolsters using the inside of his piano. It’s like the three musicians are channelling themselves through the same default sound – a strikingly original opening gambit to a savvy hour of improvised music.”

“Yes, this trio is pretty astounding. I saw them in Houston on November 27th, and I have to say that they have even come a long way since they recorded Unearth, a recording that I was proud to release on nuscope. The ways in which this group interacts and creates new environments for improvisation reminds me of the Graewe/Reijseger/Hemingway trio, despite the different instrumentation. They create a new world every time they perform. This was one of the best improvised concerts I have seen in quite some time, and is right up there with performances by other long-time groups that I have witnessed live such as G/R/H, the Schlippenbach Trio, and Parker/Guy/Lytton.”

“For me, however, the highlight was hearing the trio at Snug Harbor. A working band since 2002, this drummer-less group drew rapt attention from the club crowd with performances that bordered on musical telepathy. Working without the usual road maps — song forms, chord changes, fixed meter — the group delivered a music that incorporated aspects of contemporary classical music, but also felt like a vibrant continuation of the “jazz” tradition.

In other hands, this music might have seemed a cool, intellectual exercise in musical collage. From these three, it proved utterly sensuous, full of golden keyboard sonorities, breathy winds and even the rare sound of an accomplished bassist rubbing the body of his instrument.”