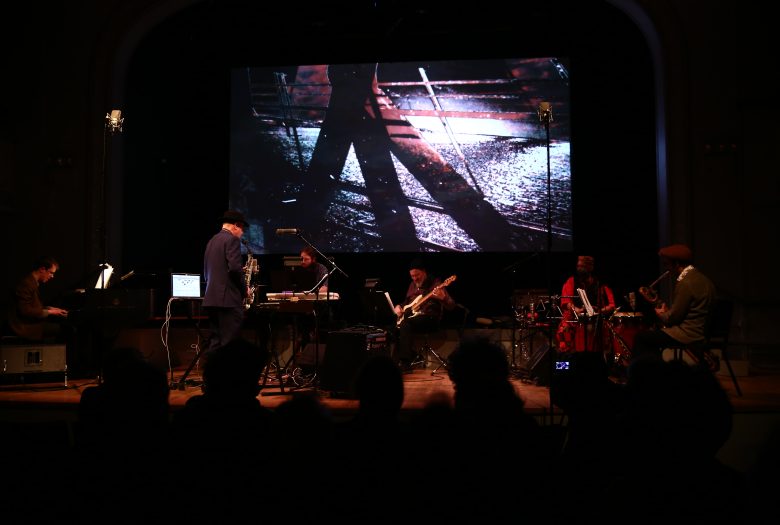 Stepping Out of The Space: Kit Fitzgerald and Peter Gordon in Conversation with Charles Eppley

Long-standing collaborative duo and performance pioneers, video artist Kit Fitzgerald and composer Peter Gordon return to Roulette with the world premiere of their new work Frozen Moments of Passion. In this piece, natural and abstracted imagery—including Fitzgerald’s signature transformative video paintings—are created, processed, and mixed live and alchemized with Gordon’s sax and piano. Singular moments are frozen in time, visually and sonically, extending into the sublime. Accompanying the composer in his musical ensemble is Gavin Rayna Russom—renowned lead synthesist of the acclaimed LCD Soundsystem—on modular analog synthesizer, Michaël Attias on saxophones, and Max Gordon on synths and keyboards.

Kit Fitzgerald is a video artist and director working in live video performance, single-channel video, and installations. Her work utilizes small hand-held devices and large studio configurations, drawing, and processing. She pioneered video as a performance medium in the 80’s with collaborators Peter Gordon and Max Roach at LaMama, BAM Next Wave Festival, Lincoln Center, Aaron Davis Hall, and opera houses and theaters abroad. Other collaborators include choreographers Donald Byrd, Bill T. Jones, Yoshiko Chuma; musicians Ryuichi Sakamoto, Ned Sublette and Matt Mottel; poets Bob Holman, Ann Waldman, and Seiku Sundiata; and theater companies The Talking Band, Northern Netherlands Theatre, and The Wooster Group.  Her most recent work includes music videos for DFA and OGenesis Records as well as video performance and projection design for Arthur Russell’s Instrumentals directed by Peter Gordon at the Sydney Festival, Primavera Festival, MoFo Festival in Tasmania, and venues throughout Europe.  Fitzgerald has directed award-winning documentaries on art and culture. She has exhibited at the Whitney Museum of American Art and Museum of Modern Art and has twice been in the Whitney Biennale. She has been awarded commissions from Tokyo Broadcasting, NHK, and SONY Japan, and won prizes at international film and television festivals. Her work is distributed by Electronic Arts Intermix, New York.

Rayna Russom is a New York based multimedia artist and composer of electronic music. Using the analog and digital synthesizer, she has produced a body of extremely influential art and music over the last 15 years. Much of her work is informed by her deep relationship with the analog synthesizer, a tool she has applied herself to not only as a composer and player but also as a designer and builder since 1999.  As someone who had never been comfortable in the fixed ideas which surrounded gender and all of the social frameworks that accompanied it, the possibilities of music and specifically analog synth electronic production were a critical way for her to engage with the outside world and still be authentic to her internal world. Part of Rayna’s vision is to combine the rigorousness of academic music and art—and its serious intentions to transform culture through its ability to communicate spiritual ideas—with the world of the club where these connect to real people’s daily lives. In addition to recording and performing music, she also creates the visual elements for her work including installations, music videos, record covers, costumes, sets, and props. Rayna is a current member of LCD Soundsystem with whom she recently completed a two and a half year world tour in support of their number one album American Dream, followed up by a DJ tour with bandmate Nancy Whang as The Ladies of LCD Soundsystem. She is one of National Sawdust’s Artists in Residence for 2019 and will perform new work there several times through the season. Rayna came out as a trans woman in 2017.

Michaël Attias is a saxophonist/composer based in New York City since 1994. As a leader, he has released seven critically-acclaimed albums, most recently the 2017 debut of the Michaël Attias Quartet, Nerve Dance. As a sideman, he has performed and recorded all over the world alongside some of today’s most original and compelling musicians. Attias has also composed and designed sound in New York and at various regional theatres. He was named a 2000 Artists’ Fellowship Recipient of the New York Foundation for the Arts and was awarded MacDowell Arts Colony fellowships in Fall 2008 and Summer 2016.

Max Gordon is a composer and musician based in New York City. Recent composition credits: The Winter’s Tale (TFANA, NY Times Critic Pick), Charles Perry (Verve Records) and collaborations with hip hop choreographer Jennifer Jancuska. He has worked on the Broadway music teams of The Band’s Visit, The Cher Show, and Tootsie. He is a lifelong student of Peter Gordon and Kit Fitzgerald.

Eve Essex is a Brooklyn-based musician who performs with alto saxophone, piccolo, voice and electronics, harnessing elements of classical, drone, avant-jazz, and distorted pop. Her first solo album, Here Appear, was released by Soap Library (cassette) and Sky Walking (LP) in 2018. She frequently performs with ensembles Das Audit, Hesper, and HEVM. With Das Audit she has released an EP and live cassette, additional recordings have appeared on compilations by Wild Flesh Productions, Untergang Institut, PAN (with James K), and Sky Walking (with Dan Fox). She is host of the monthly series “How To Tell A Sound” for Cashmere Radio, Berlin. https://eveessex.com

Acclaimed for his broad contributions to contemporary music and sound art, violinist/composer Tom Chiu has performed over 200 premieres by musical pioneers Muhal Richard Abrams, Morton Feldman, Ornette Coleman, David First, Oliver Lake, Henry Threadgill and more. A recent recipient of the Chamber Music America Commissioning Grant, Chiu has dedicated new works to Joan La Barbara, Sylvere Lotringer, Ernesto Neto, Lee Breuer, and Phill Niblock with performances at BBC, Mount Tremper Arts, Park Avenue Armory, Bang-On-A-Can Marathon, MOMA PS1, and Anthology Film Archives. As founder of the FLUX Quartet, he has led a dynamic ensemble which has inspired a renaissance in the string quartet genre. Chiu holds degrees in chemistry and music from Yale and Juilliard, and has appeared as a cultural consultant in numerous contexts, most recently as panelist for the NEA.

Peter Zummo is a composer and trombonist whose work with the contemporary trombone is genre non-conforming, and yet finds a place in any genre. His work as a creator and performer encompasses both the contemporary-classical and vernacular genres. Working in close collaboration with artists in related media, including composers, poets, bandleaders, choreographers, directors, and filmmakers, he functions both as a supporting character as well as a principal artist.

Multi-percussionist, Mustafa Ahmed was introduced to the NYC music scene as a result of his work on James Mason’s 1977 classic album, “The Rhythm of Life” and “Your Mama”, which was a Billboard top-20 hit in 1983. Mustafa began his association with the legendary cellist/composer, Arthur Russell. helping Russell explore the emerging rhythms of rap,hip-hop,and world-beat music and arranged and performed multi-percussion on Russell’s dance classics including: “Let’s Go Swimming”, “In the Light of the Miracle”, “This is How We Walk on the Moon”, “School Bell/Tree House”, “Platform on the Ocean”, and “Is It All Over My Face”. In the years following Russell’s death in 1992, Mustafa has continued to record and perform with Russell’s closest collaborators: Peter Gordon (“Innocent”, ”Brooklyn”, “Same Language/Different World”), Elodie Lauten (“Harmonic Protection Circle” and “Waking In New York”), and Peter Zummo (“Experimenting in Household Chemicals” and “Lateral Pass”). Mustafa appears on over 30 albums/cds and invites you to join him every Sunday morning for a contemporary gospel music experience at The First Presbyterian Church in Jamaica.

Stepping Out of The Space: Kit Fitzgerald and Peter Gordon in Conversation with Charles Eppley