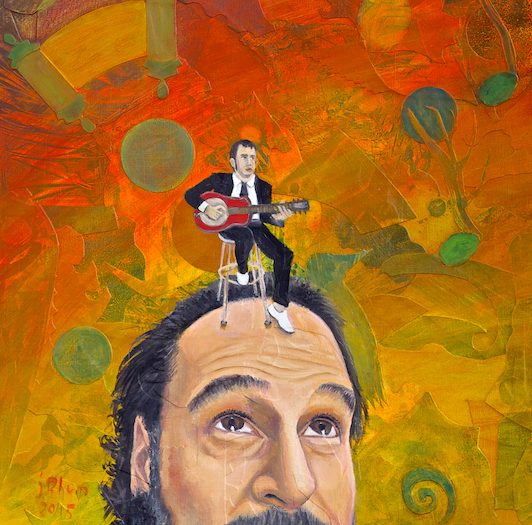 Observe the holiest night of the Jewish year with services led by Rabbi Dan Ain and The Sway Machinery’s Jeremiah Lockwood. Lockwood’s music is born out of an apprenticeship with the late Piedmont Blues master Carolina Slim and an intense study of the music of his grandfather, the legendary Cantor Jacob Konigsberg. Seamlessly channeling these two influences, he chants traditional prayers like Kol Nidre and Avinu Malkeinu with an old-world wail—while often accompanying himself on blues guitar. Along with Rabbi Dan’s plain-sense perspective on the religious themes of the day, the evening includes Joining Rabbi Dan and Lockwood are keyboardist Shoko Nagai, drummer John Bollinger and Jewish meditation leader Miriam Eisenberger.

Rabbi Dan
Preacher and connector, Rabbi Dan Ain gathers those who are open to being reached. He finds holiness in honest conversation, in the spaces where people can say what they really think and allow others to do the same. His latest project Because Jewish creates opportunities for our religious perspectives to be in genuine dialogue with our artists, our thinkers and our everyday lives. For the past decade, Rabbi Dan (@rabbidan) has been curating these offerings around New York City at the 92nd St Y, 92YTribeca, City Winery and as the rabbi of The New Shul. He’s hosted Friday Night Dinners with comedians and cosmologists, klezmer brunches with composers and analysts, and conversations around tables in apartments or backyards with groups of friends looking for ways to talk about God on their own terms. The High Holiday services he leads, with blues musician and cantorial singer Jeremiah Lockwood of The Sway Machinery, is an example of how he is finding meaningful ways to worship in the 21st century – creating experiences that speak to people living in today’s world using the language, lessons and music of the past.

A Conservative rabbi, Rabbi Dan Ain is a CLAL Resident and was ordained at The Jewish Theological Seminary in Morningside Heights. For updates, sign up at becausejewish.com

Jeremiah Lockwood
Jeremiah Lockwood’s music career began with over a decade of apprenticeship to the legendary Piedmont Blues musician Carolina Slim, playing in the subways of New York City. He also trained under his grandfather Cantor Jacob Konigsberg and performed in his choir. Jeremiah’s band The Sway Machinery seeks inspiration from diverse realms of experience related to the cultural geography of New York City. The Sway Machinery has played around the world, including stints at legendary music festivals like Montreal Jazz, Roskilde, and perhaps most notably, Festival au Desert in Timbuktu, Mali. In addition to leading The Sway Machinery, Jeremiah toured for years as guitarist in the popular world-beat band Balkan Beat Box and has scored numerous film and video projects. Jeremiah was a recipient of the 2007-8 Six Points Fellowship for Emerging Jewish Artists, was 2010 Artist-in-Residence for the Forward and was a 2011 Brooklyn Philharmonic Orchestra Composer Fellow. Jeremiah is currently working on a PhD in Education and Jewish Studies at Stanford University. His solo guitar and voice record, entitled LOCKWOOD, was released in the Fall of 2014 on System Dialing Records. The new Sway Machinery LP, entitled Purity and Danger, was released in the spring of this year to critical acclaim.

Shoko Nagai, born in Nagoya, Japan, is a composer, pianist, accordionist and improviser. After graduating from Berklee College of Music in 1999 she moved to New York City and quickly established herself in various scenes performing with such renowned artists as John Zorn, Butch Morris, Frank London, Miho Hatori (CiboMatto), Satoshi Takeishi, Erik Friedlander, Marc Ribot, Elliot Sharp, to name a few. Nagai performed in Sweden for the Nobel Prize Ceremony for Herta Muller in 2010. She is a winner of grant from NYFA 2010 and Jazzjaunts 2008. She also composes and performs for various film projects.

John Bollinger is known in the New York scene as an explosive force, his fearsome groove and bone shattering bursts of energy adding an incredible excitement to his wonderful feel for a multiplicity of genres. He has worked with, among others, Barbez, Nanuchka and Guignol. John debuted with The Sway Machinery in 2009 and is featured on all of the bands subsequent recordings. In addition to his work as a musician, John is an educator and an accomplished visual artist in a variety of media. His video compositions, which walk the line between comedy and high concept performance art continue to astound an ever growing circle of cognoscenti.

Miriam Eisenberger, LCSW is a licensed clinical social worker with over a decade of experience in the field of mental health and group work. Miriam is a dedicated proponent of integrating meditation practices into urban life, and believes that these skills are accessible to anyone once they are given some good introductory guidance. For years, she has studied with many great teachers from Buddhist, Jewish, and Mindfulness meditative traditions and enjoys integrating these varying perspectives into her teachings. Through her mindfulness consulting practice, Mindful Element, she offers mindfulness and stress reduction trainings to individuals, groups, and organizations and is available for speaking engagements, professional development, and a variety of mindfulness programming.  She frequently teaches at the Jewish Meditation Center of Brooklyn and is a certified Mindfulness Teacher through The Mindfulness Institute.