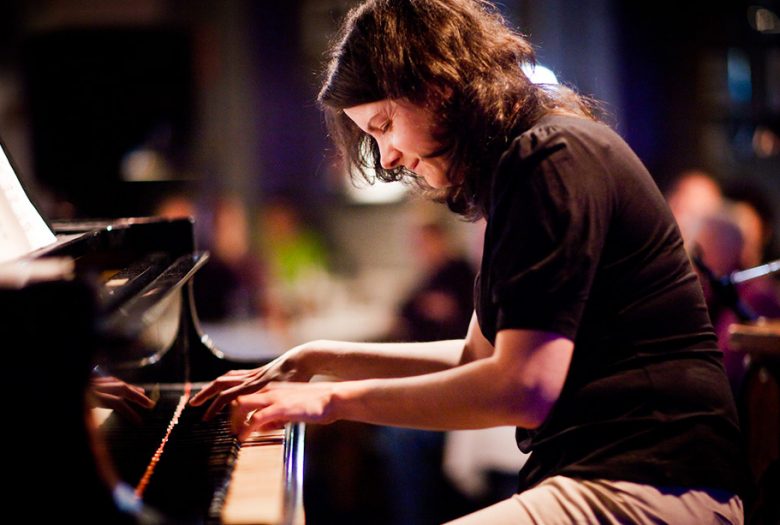 Born in Vancouver, Canada, Kris Davis began playing piano at the age of 6. She studied classical piano through the Royal Conservatory of Music and performed in various concert settings as a soloist and as an accompanist. In 1997 she moved to Toronto, Canada where she attended the esteemed University of Toronto on scholarship and studied jazz piano with Canadian pianists Brian Dickinson and Gary Williamson. Kris integrated herself into the Toronto jazz scene and performed as a freelance musician and as a leader of a trio and septet with Toronto musicians Kevin Turcotte and Mike Murley. In 1999, Kris was asked by the Duke Ellington Society to perform a solo piano piece for the anniversary of Ellington’s passing. She attended the Banff Centre for the Arts Summer Jazz Program in 1997 and 2000 on scholarship and had the opportunity to perform and work with renowned artists such as Joey Baron, Don Thompson, Kenny Wheeler and Kenny Werner.

After graduating with a Bachelors degree from the University of Toronto in 2001, Kris was awarded a Canada Council Arts grant to study with prominent composer/pianist Jim McNeely and relocate to New York. She has since become an active participant in the BMI Jazz Composers Workshop, has performed with, among other local greats, Tony Malaby, John Riley, and Chris Speed, and has taught at the Maine Jazz Camp and the Hartwick Music Festival in Oneonta, New York. As a leader, Kris’ group has been heard in such New York listening rooms as the Knitting Factory, Cornelia Street Cafe, Detour, the 55 bar, NuBlu, Kavehaz, the Scandinavia House, ‘Concerts at One’ music series through the Trinity Church of New York, Lady Fest East and has toured Canada, and the coasts of the United States. In June of 2003, Kris recorded a number of her compositions on her first album, ‘Lifespan,’ released on the Spanish label Fresh Sound/New Talent Records which features New York greats Tony Malaby, Russ Johnson, Jason Rigby, Eivind Opsvik and Jeff Davis. ‘Lifespan’ was voted one of the top ten jazz records of 2004 in the New York magazine Jazz House and has been praised by critics from All About Jazz, Cadence, the Ottawa Citzen, Jazzman, JAZZNYTT from Norway and other publications in Italy, Spain, France and Greece.