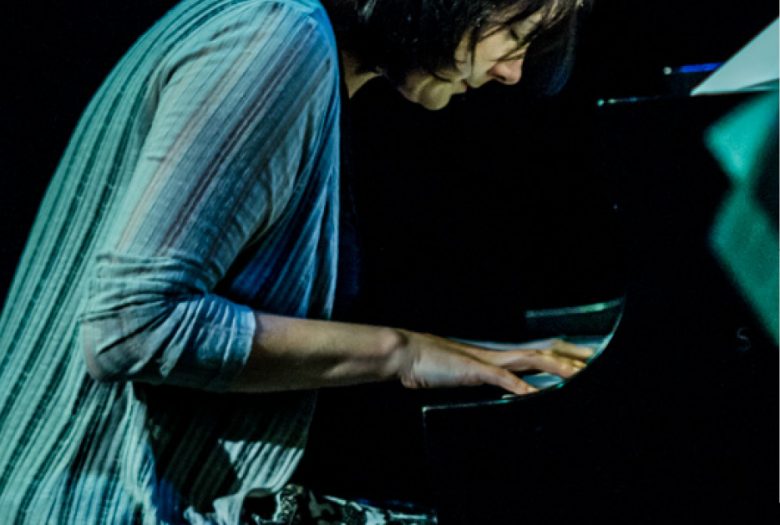 “A freethinking, gifted pianist on the scene, Davis lives in each note that she plays. Her range is impeccable… I consider her an honorary descendant of Cecil Taylor and a welcome addition to the fold.” –Jason Moran

“Over the past couple of years in New York, one method for deciding where to hear jazz on a given night has been to track down pianist Kris Davis.” — The New York Times

Pianist and composer Kris Davis – one of the most progressive, prolific figures on New York City’s creative jazz scene – unveils her octet project, Infrasound. A unique octet comprised of four bass clarinets (Ben Goldberg, Oscar Noriega, Andrew Bishop, and Joachim Baderhorst) plus guitar (Nate Radley), accordion and organ (Gary Versace), piano (Davis) and drums (Jim Black), Infrasound collectively explores the growling and sprawling overtones of low frequencies of its namesake, on the sound and energy that are as much felt as it is heard. “I aimed for Infrasound to explore the low end of the spectrum, creating a living, breathing wild animal,” says Davis. With an evening-length suite created specifically for the octet from a Shifting Foundation commission, Infrasound projects Kris Davis as a bold visionary whose original art starts at the point where others cannot see or hear.

The 33-year-old Kris Davis – an artist who offers “uncommon creative adventure” (Jazz Times) – has had one of the busiest, most notable years of her career in 2013: two albums under her name this year, the brand-new solo disc Massive Threads (on Thirsty Ear) and the quintet set Capricorn Climber (Clean Feed), which found Davis alongside saxophonist Ingrid Laubrock, violist Mat Maneri, bassist Trevor Dunn and drummer Tom Rainey. Recently dubbed one of the music’s top up-and-comers in The New York Times, Davis began her debut as leader with Lifespan in 2003; her other recordings include The Slightest Shift (2006) and Rye Eclipse (2008) and the trio set Good Citizen (2010) for Fresh Sound. In addition to her work as a leader, Davis has performed with such top figures as Paul Motian, Tim Berne, Bill Frisell, John Hollenbeck, Kermit Driscoll, Michael Formanek, and Mary Halvorson. In 2014, in addition to the debut album from Infrasound, Davis will work on a new album for her trio, featuring Rainey and bassist John Hébert: Waiting for You to Grow, which was written through a residency commission at Jazz Gallery.
krisdavis.net