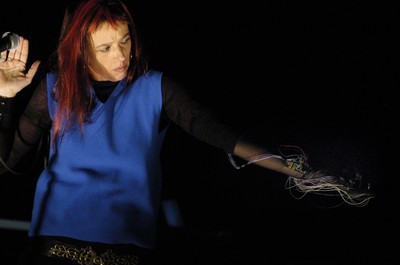 Two older pieces and a new one, Why__dreams like a Loose Engine (autoportait) 1998-99, composed of juxtaposed layers of activity and stillness. A text by Melody Summer Carnahan describing a train ride through a vast landscape and a character oscillating between her outer and inner world. The sounds, controlled live by the lady’s glove, are coming from small motors (farewell to the mechanical age). Their movements are computer controlled and their sounds processed live.

The three pieces are followed by an extraordinary talk by the artist, explaining process and history of these controllers and sound machines.

Laetitia Sonami is a sound artist, performer and researcher. Born in France, she settled in the United States in 1975 to pursue her interest in the emerging field of electronic music and  studied with Eliane Radigue, Joel Chadabe, Robert Ashley and David Behrman. Sonami’s sound performances, live film collaborations and sound installations focus on issues of presence and participation. She has devised new gestural controllers for performance and applies new technologies and appropriated media to achieve an expression of immediacy through sound, place and objects. Best known for her unique instrument, the elbow‐length lady’s glove, which is fitted with an array of sensors tracking the slightest motion of her hand and body, she has performed worldwide and earned substantial international renown.