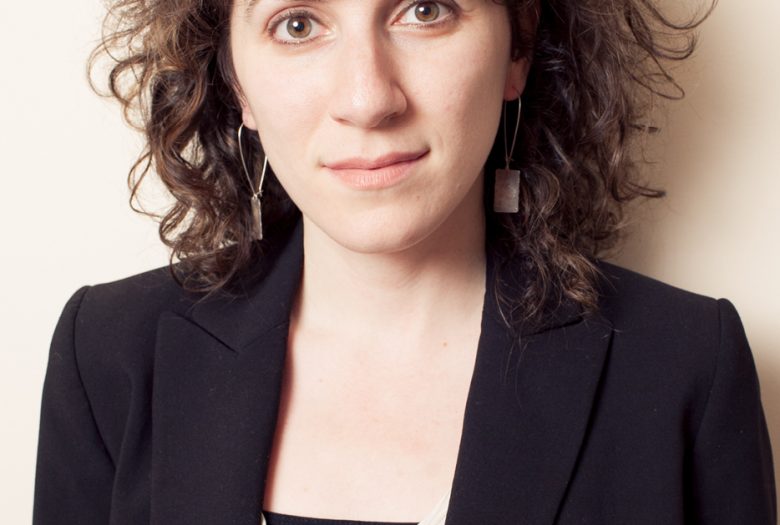 Lainie Fefferman’s Here I Am is presented at Roulette with a residency through the Jerome Foundation.

An oratorio in nine movements for three singers, clarinet, violin, cello, electric guitar, piano, percussion, and drum set, Lainie Fefferman’s Here I Am is a deeply personal meditation on nine perplexing but often ignored portions of the Hebrew Bible. The music, set to the Jewish Publication Society’s plain and literal English translation of the Hebrew text, uses disparate musical genres and techniques (power chords, dreamy minimalism, folk-balladry, and performance art) to recontextualize the familiar biblical narratives in fresh light. The verses chosen for Here I Am include: the laws expounded in the Book of Leviticus; Lot’s offering of his virgin daughters to the people of Sodom; Abraham’s haggling with the divine over how many innocent men are needed to save Sodom; and Abraham’s willingness to sacrifice his own son to show his devotion. Written for ensembles Newspeak and Va Vocals (Martha Cluver, Mellissa Hughes, and Caroline Shaw), Here I Am is an exploration of Fefferman’s relationship with her Jewish identity as a composer and, also, as an ethical thinker in the world.

Here I Am is directed by Ashley Kelly Tata with lighting design by Anshuman Bhatia.

Lainie Fefferman is a composer living and working in Brooklyn. Exploring the personal and the idiosyncratic aspects of music-making, she has created pieces for pianist Michael Mizrahi, guitarist James Moore, bassist Eleonore Oppenheim, electric guitar quartet Dither, So Percussion, the New York Virtuoso Singers, NOW ensemble, Newspeak, pianist Kathleen Supové, TILT Brass, and ETHEL. Fefferman’s recent performance projects include Sideband, a laptop-based project; the avant vocal trio Celestial Mechanics; and Phthia, a minimalist folk band. Fefferman is the founder and co-director of Exapno, a New Music Community Center in Downtown Brooklyn, and lead-organizes the New Music Bake Sale. As a composer and a vocal performer, Fefferman has participated in a number of workshops, including: the Sentieri Selvaggi composer workshop in Milan (with Julia Wolfe), the Meredith Monk & Vocal Ensemble Workshop in New York City, the Bang on a Can Summer Residency in North Adams, Massachusetts, and the Arabic Music Retreat with Simon Shaheen at Mount Holyoke College.
lainiefefferman.com

NEWSPEAK, named after the thought-limiting language in George Orwell’s 1984, is a powerhouse ensemble that became an early standout within New York’s “indie-classical” scene.  The current stellar line-up–David T. Little (composer/drums), Mellissa Hughes (voice), Eileen Mack (clarinet), Caleb Burhans (composer/violin), Taylor Levine (guitar), Brian Snow (cello), James Johnston (piano), and Peter Wise (percussion)–began performing together in 2008, and has been featured as part of the Tune-In Festival with eighth blackbird at the Park Avenue Armory, the Ecstatic Music Festival in NYC, on New Sounds Live, at the International Festival of Arts and Ideas, and on the 25th Anniversary Bang on a Can Marathon.  They have headlined on the MATA Festival, shared bills with The Fiery Furnaces as part of Wordless Music, and performed as part of John Zorn’s Full Force festival, and this summer will make their international debut at the Muziekgebouw as part of the 2014 Holland Festival.  Actively committed to the music of its time Newspeak has commissioned and premiered work by David T. Little, Caleb Burhans, Corey Dargel, Oscar Bettison, Ted Hearne, Judd Greenstein, Missy Mazzoli and many others. “You could call this punk classical,” Lucid Culture wrote, “fearlessly aware…(and) resolutely defiant.”  New Sounds host John Schafer called them “important players on the new music scene here in New York.”  Newspeak has released two critically acclaimed albums, sweet light crude (2010, New Amsterdam) and Soldier Songs (Innova, 2013) and is currently planning its third.
http://newspeakmusic.org/

Va Vocals (sopranos Martha Cluver, Mellissa Hughes, and Caroline Shaw) has been performing together since 2009. Described as “utterly unaffected and drop-dead stylish” (WQXR), they are versed in a broad range of styles, from baroque to modern to pop. They have appeared with Alarm Will Sound, AXI- OM, Signal, Roomful of Teeth, ACME, Wordless Music, the Trinity Wall Street Choir, So Percussion, The Roots, The National, My Brightest Diamond, John Cale, and the Mark Morris Dance Group. Recordings that feature the Va sopranos include the recent Signal release, Shelter (Cantaloupe), and an upcoming Signal release, Music for 18. They hold degrees from Eastman, Yale, and Princeton.

Ashley Tata is a Live-Performance-Maker based in Brooklyn, NY. She received her BA in Theatre Studies from Marymount Manhattan College and her MFA from Anne Bogart’s directing program at Columbia University’s School of the Arts in 2012. She has crafted a hybrid career as a director of New Opera and of devised and original pieces of theater. These include: A Weimar Flute, a version of Mozart’s Die Zauberflöte incorporating texts of Weimar-era writers, staged in the Housing Works Bookstore (Morningside Opera Company); Dirt (Part 1) by Samara Weiss (HERE’s Summer Sublet Series); a staged reading entitled Intermeddlers: Excerpts from The Children’s Hour & the 1936 Case to Have it Banned in Boston a piece that combines Lillian Hellman’s play with documents from the court proceedings in Boston to ban the production (Martin E. Segal Center). As an assistant director she has worked with Robert Woodruff on numerous occasions, including the critically acclaimed premiere of David T. Little and Royce Vavrek’s opera Dog Days and a staging of Heiner Müller’s Anatomy: Titus. She assisted Chen Shi-Zheng on the US premiere of Toshio Hosokawa’s opera Matsukaze (Spoleto Festival, USA; Lincoln Center Festival); and she assisted David Lang on the premiere of his opera love fail (Yale’s Festival of Arts and Ideas; BAM’s Next Wave Festival). Upcoming directing projects include David T. Little’s Soldier Songs with video by filmmaker Bill Morrison at the Atlas Theatre in Washington, DC and the Holland Festival; and assisting Daniel Fish on the premiere of Ted Hearne’s opera The Source which will premiere at BAM’s Next Wave festival in October of 2014.
http://ashleykellytata.com/