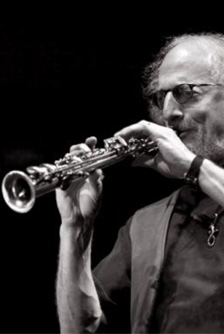 KIHNOUA is a term borrowed from ancient Greek that might have meant “the difference.” Or perhaps: “the unity of opposites” …on the one hand oral traditions; on the other hand new-jazz spontaneity. A long-time fan of traditional Korean p’ansori folk-singing and of Korean sinawi improvisation, it is with great pleasure that Larry Ochs presents music that intermingles the thoughts, sounds and structures of “improvised music” (including jazz) with influences from the older sound-world of Korea and from other folk-music/blues influences worldwide. The core trio of Amendola, Lee and Ochs have played together since 2007. Trevor Dunn joins the band for the first time on this spring 2012 six-city tour.

Scott Amendola and bassist Trevor Dunn team up together regularly in the Nels Cline Singers; both have a working relationship with Ochs since the late 1990’s in other Ochs’ projects as well as with Rova Sax Quartet, of which Ochs is a founding member. While Ochs’ love of Korean p’ansori music inspired this band, it was Dohee Lee’s arrival in San Francisco from Korea that directly led to the band’s formation. Please note that while Lee, a performance artist, dancer, composer and vocalist, studied traditional Korean singing in university, with Kihnoua her vocals are improvised. Kihnoua’s music is composed by Ochs specifically for improvisers; the stories told are open to the interpretation and imagination of the participating listener.