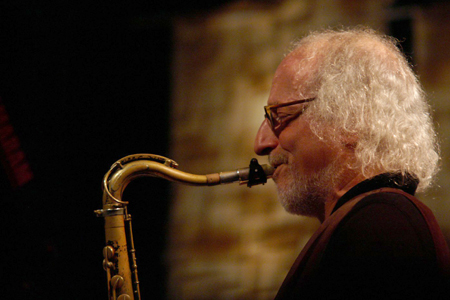 Larry Ochs Sax & Drumming Core was formed in June 2000 for a special – invitation performance in San Francisco. The Core’s music is a meditation on and a 21st-century distillation of the songs of American and eastern European blues-shouters, and of traditional chant-singers from Asia and Africa. This is the space that this band was inspired by – at first. But then, after all, the end result is modern. Larry Ochs Sax & Drumming Core consists of both Scott Amendola and Donald Robinson on drums and is led by Larry Ochs on tenor and sopranino saxophones. As of November 2007, the trio expanded to a quintet, including Satoko Fujii on synthesizers and piano, and Natsuki Tamura on trumpet.

Ochs – quoted in the liner notes to the new quintet CD coming out in time for this upcoming tour:

“For me form precedes function. If I can’t see the big picture, that universe of sound within which a given piece will come to life, it is hard to organize the internal details. The great thing about the Sax & Drumming Core experience is that I have four special compositional forms developed for this band. So I actually get to write pieces similar to other ones I’ve already penned, just like a jazz band-leader who works with “the changes.” It’s cool, and it really helps to get to the center of the music, to probe deeper and evolve. This CD has three new pieces that are further explorations in forms used on previous S & DC CDs, made by the original trio. Abstraction Rising plays within a new form (and the most conventional). Thanks especially to the additions of Satoko Fujii and Natsuki Tamura, we have all been pushed further into the great unknown, and as we get more chance to play together we look forward to taking it all further out while still retaining a connection to the folk-forms that first inspired me to organize the original trio in 2000.”

The quintet has performed 11 concerts in the Western part of North America and at 3 festivals in Europe, plus a performance/recording in Venice, Italy. A CD release, Stone Shift (Rogue Art, Paris) should see the light of day in fall of 2009 and will be available on tour.

The band’s first trio CD, The Neon Truth, was released on Black Saint (Italy) in 2002. The band’s first European tour took place in Feb/March 2002. A second tour occurred in May/June 2004 including Festival Musique Action in Nancy, France, and a recording session and live concert in Venice, Italy. The resultant CD, Up From Under, is out on Atavistic (USA/ 2007). In 2007, the trio reuniyed following the release of the second CD, and toured in Europe with Fujii and Tamura to three festivals (Zagreb, Maribor, Wels) and to Teatro Fondamente Nuove in Venice, where they recorded live over two days; that CD – STONE SHIFT – should see the light of day in fall 2009 on ROGUE ART (France),

Described as a ‘percussive dervish’ (Coda) Donald Robinson is a technical master of the drums. He is a stalwart of the San Francisco Bay Area avant-garde jazz scene, playing and recording with many of the area’s improvisational players, from saxophonists John Tchicai, Marco Eneidi and Larry Ochs to koto player Miya Masaoka and pianist Matthew Goodheart, and with prominent visitors like Cecil Taylor, Wadada Leo Smith, George Lewis, trumpeter Raphe Malik and Canadian pianist Paul Plimley. Much of this work has featured the combination of Robinson and bassist Lisle Ellis as rhythm section: ‘the best bass-drums tag team on the scene’ (Jazz Times). His longest musical association, dating from the 1970’s, was with the late tenor saxophonist Glenn Spearman. He has appeared on numerous CDs, especially with Spearman, Ochs and Ellis.

Satoko Fujii – “Unpredictable, wildly creative, and uncompromising…Fujii is an absolutely essential listen for anyone interested in the future of jazz.” – Dan McClenaghan, All About Jazz. Critics and fans alike hail pianist and composer SATOKO FUJII as one of the most original new voices in jazz. A truly global artist, she splits her time between New York City and Japan and has toured internationally leading several different ensembles. She uses melodies as simple and straightforward as a folk song, as well as the harmonic sophistication of great jazz, and she can manipulate the extended forms of symphonic composers. As an improviser, Fujii is equally wide-ranging and virtuosic. In her solos, explosive free jazz energy mingles with delicate melodicism and a broad palette of timbre and textures. Her phrasing is equally indebted to her classical training and her jazz experience. She has showcased her astonishing range and ability on over 30 CDs as leader or co-leader since 1996.

Natsuki Tamura – “Tamura shrewdly creates a sound world that while completely his own also hints at the mythological and musical folklore of Asian and European cultures…. a persona no less self-contained than that of early, wandering bluesmen like Robert Johnson or Charlie Patton.” – Ken Waxman, Jazzweekly

Japanese trumpeter and composer NATSUKI TAMURA is internationally recognized for his ability to blend a unique vocabulary of extended techniques with touching jazz lyricism. His appearances at festivals worldwide include a solo trumpet performance at the 1998 Texaco New York Jazz Festival, as well as appearances at Newport Jazz in Madarao, Festival of New Trumpet Music at Tonic in NYC, San Francisco Jazz Festival, Vancouver Jazz Festival, Yokohama Jazz, Moers Festival in Germany. In addition to performing with his own group, Tamura has performed with Satoko Fujii, Rova’s Electric Ascension Band, Misha Mengelberg, Chris Brown, and Le Quan Ninh among many others.