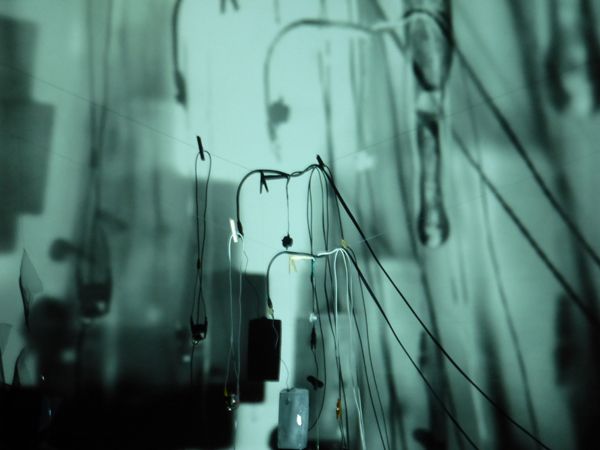 Leslie Ross and Katherine Liberovskaya have again teamed up for a program of collaborative pieces for bassoon and electronics in dialogue with live video involving at various points different kinds of microphones, surveillance cameras, piano strings, small motors, melting ice, a fountain and a metal bassin…

Ross explores time, timbre and tuning, and multiphonics with her macro-mic’d bassoon, hydrophonics, motor strummed strings and ice dripping on metal in in a quadraphonic environment.

Liberovskaya captures live details of the unfolding events with diverse cameras and amalgamates the resulting images with variations of visual feedback and pre-recorded footage.

Leslie Ross, performer, sound-installation artist, bassoonist and instrument-maker, has been exploring and experimenting with sound for over 25 years. Very active in the New York downtown improv scene through the late 80s’ and 90s’, she played and toured with many musicians and groups. In gallery or street performance settings as well as in collaboration with choreographers she has created works for numerous constructed instruments and installations. In the past few years she has returned her focus to a detailed exploration and understanding of bassoon multiphonics, and this process of investigation has led to the creation of solo works that use an extensive system of micro-amplification: 15 microphones are placed at tone holes on the instrument and the signal from these microphones are directed to many speakers around a room. Ross’s pieces have evolved over the course of the past couple of years to fall increasingly into a minimalist mode –this entirely due to the demands of the material. She is also in the process of re-building another one of her ‘organ- bíkes’ along with a ‘music-box-bike’ (mobile mechanical pedaled instruments) and continues to build replicas of historical bassoons in her workshop on the Lower East Side of NYC.
www.leslieross.net/otherT