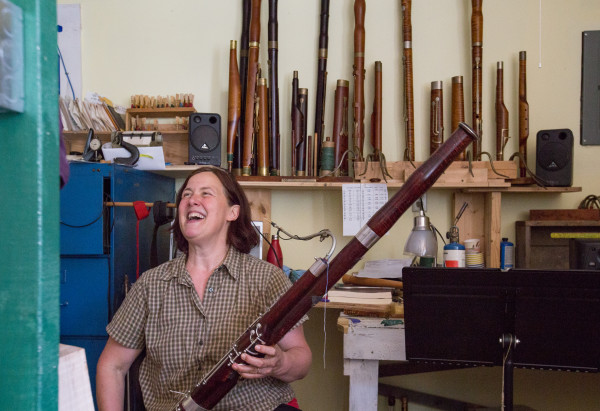 In Excursions Leslie Ross will be riding her Cyclestrument around Battery Park and through the streets of lower Manhattan. Each performance will feature one or two original compositions that have been transferred to paper rolls for this mechanical instrument: some inspired by tradition organ grinder music, some indulging in the soundscape and lushness of fluted pipes. Where usually automated instruments play identical facsimile performances at each playing, with this instrument pieces will be partially controlled/influenced/interfered with by unexpected changes in speed of locomotion. The ever changing sound-source along with the accompaniment of city life will also have a constant effect on how it is heard.

The Organ-Bike – the first in a series of Cyclestruments – will be taken out for a ride (dry weather permitting) on Thursday Aug 16 , Saturday August 18 & Sunday August 19 (click on day to view route and time). This is part of a Festival of Sound Art in Public Space sponsored by Roulette – check their website of other events.

The Organ-Bike will also be set up as a stationary bike on Tuesday August 21 at the Stone (corner o Avenue C and 2nd Street) 8pm where Leslie Ross will also play in two sets of duets with David Watson / Bagpipes and Michael Attias/ Saxophone.

Leslie Ross, bassoonist, improviser, composer and instrument-builder, has been creating and performing since the mid 80s.