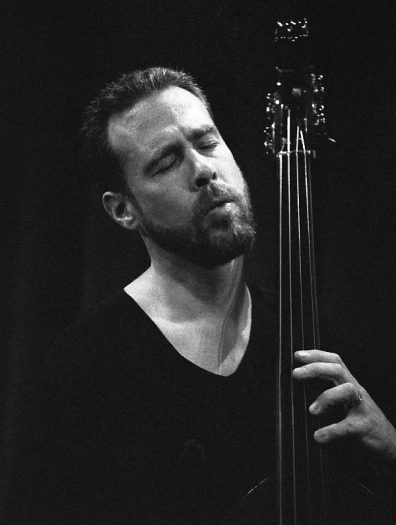 Some consider Bob Dylan to be one of the most influential musicians of our era. His materials are traditional-song forms inherited from the blues and the music of the British Isles, and imagery inspired by the greatest writers of our culture. He has, however, found some very personal ways of combining sound and text: indeed, a great poet.

Jewels and Binoculars was born out of Lindsey Horner and Michael Moore’s mutual love of Dylan’s music. Starting in the late 90’s, New York bassist Lindsey Horner would get together with reedist Michael Moore and percussionist Michael Vatcher, longtime residents of Amsterdam, Holland, to explore that repertoire.

Interpreting the songs instrumentally, the trio uses the power of the tried and true folk song forms as the starting point for their improvisational flights, all the while keeping the power of the words and images fresh in mind.

Rather than guitar, voice and harmonica, the instrumentation relies primarily on the clarinet, bass clarinet or alto saxophone for the melody, the acoustic bass for the harmony, and Michael Vatcher’s wide variety of percussion instruments for textural variation.

The latest recording, the third from this collective trio, is entitled Ships With Tattooed Sails on Horner’s Upshot Records label. It has found its way onto several critics’ “Best of 2007 ” lists and it is available through www.lindseyhorner.com <http://www.lindseyhorner.com> , downtownmusicgallery.com or cdbaby.com.

The previous two releases, Floater and Jewels and Binoculars were released on Moore’s Ramboy Recordings label.

**PLEASE NOTE: There have been misperceptions that Jewels and Binoculars is led by Michael Moore or that it is Lindsey Horner’s project. Neither is accurate.

Jewels and Binoculars/Michael Moore, Lindsey Horner, Michael Vatcher play music of Bob Dylan is a collective trio and always has been since its inception in the year 2000. All three members share equally in the responsibilities and artistic direction of the group.